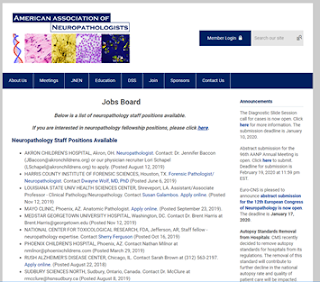 For the past year or so, the job listings on Neuropathology Blog have been reproduced on the  Jobs Board of the American Association of Neuropathologists. Rather than continually synchronizing the two lists, I've decided to discontinue the jobs listings on this blog so that candidates have to visit only one site with the most updated listings. Employers can contact the AANP to have a job listing added, subtracted, or modified. Should any institution contact me, I will forward the listing request to the AANP. The fellowship listing has also migrated to the AANP website.

I wish to publicly thank the inimitable Sherry Miller, wife of  Dr. Doug Miller, who originally suggested the idea of having a job listing on this blog. For many years, Sherry played a central role in maintaining the list. The entire neuropathology community has benefited from her work in maintaining the jobs listing. Thank you Sherry!

Best of luck to all candidates looking for positions in the wonderful field of neuropathology!
at December 13, 2019 No comments: 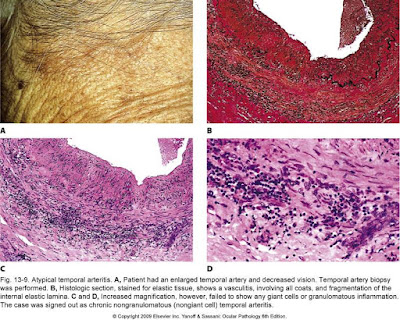 In a paper published in Annals of Neurology, Harvard neuropathologist Matthew Anderson, MD, PhD, and colleagues, report the presence of cellular features consistent with an immune response targeting specialized brain cells in more than two-thirds of autistic brains analyzed postmortem.
These cellular characteristics—not previously observed in autism—lend critical new insight into autism’s origins and could pave the way to improved diagnosis and treatment for people with this disorder.
Read more here.
at November 18, 2019 No comments:

From time to time on Neuropathology Blog, we profile a prominent neuropathologist. In the past, we've featured the likes of Craig Horbinski, Roger McLendon, Jan Leestma, Karra Jones, Areli Cuevas-Ocampo, Michael Punsoni, and PJ Cimino, among others. Today we feature Eddie Lee, MD, PhD. Dr. Lee is an assistant professor in the pathology department at the University of Pennsylvania. Here's a Q&A with the illustrious Dr. Lee:

1. Why did you decide to become a neuropathologist?
The three major topics that dominate Alzheimer’s disease research are amyloid, tau, and neuroinflammation.  The discovery of genetic mutations that cause AD or related dementias, and more recent GWAS studies support the idea that these three are perhaps the most important factors that drive AD pathophysiology.  However, it is sometimes forgotten that these were first and foremost neuropathologic observations discovered by studying human tissues using histology and/or biochemistry by George Glenner and the McGeers.  Genetics came later and was made possible by the neuropathology.  The same can be said regarding TDP-43.  This taught me that neuropathology can be a rock solid foundation for building a research career.  I have always been drawn to basic biomedical research but think that clinical training provides a sort of “compass” by which you can guide your research program.  To this day, the foundation of my research is neuropathology because it grounds me towards studying the disease itself.
2. Name a couple of important professional mentors. Why were they important to you?
I did my PhD with Virginia Lee at University of Pennsylvania.  She has been doing research for decades together wither her life partner, John Trojanowski.  Together, I saw the two of them seamlessly integrate neurodegenerative disease neuropathology with basic science.  In terms of neuropathology, I point to many with whom I have been privileged to train, including Nicholas Gonatas, Bill Schlaepfer, John Trojanowski, Zissimos Mourelatos, Lucy Rorke-Adams, Jeff Golden and Alex Judkins.


3. What advice would you give to a pathology resident interested in doing a neuropathology fellowship?
Get to know what neuropathologists do.  There is a wide variation of career paths available for neuropathologist, and the most important thing for you to figure out is what kind of neuropathologist you might want to become.  This is key because this should be what is guiding your choice in neuropathology fellowship.  So figure out what your ‘local’ neuropathologist does, and look nationally for what other neuropathologists are doing.
For those who are interested in a more basic science track neuropathology career, here is a historical perspective.  Since the beginning of academic medicine, there has been a tension between the reductionist approach where medicine is a branch of science (supported by people like Flexner and Welch) versus a more humanistic approach where medicine is an art (supported by people like Peabody and Osler).  For Peabody and Osler, clinical observation and pathologic correlation was tantamount.  In contrast, the reductionists thought that “by the end of the [19th] century, clinicopathologic correlation was reaching the limits of its explanatory possibilities.”  I will say that this sentiment is still very much alive in many corners of biomedical research. I urge you to try to think mechanistically as much as possible, to strive to understand not only pathology but pathophysiology.

4. What city would you like a future American Association of Neuropathologists meeting to be held and why?
Interesting question for me as I am currently the Assistant Secretary Treasurer for AANP and so I help identify and select the AANP meeting sites.  There is a lot that goes into the decision.  We have done our best to maintain a reasonable cost for attendees.  There are many sites that are excluded, often from more popular locations, because the cost for attendees would be significantly higher not only for AANP but for people booking rooms.  We also look at whether anyone in the US can fly to the site with at most one layover, whether there are sufficient restaurants close by, etc.  These factors greatly reduce the number of sites that are possible.  I helped pick Monterey, CA for the 2020 meeting for which I am super psyched.  A big question that it would be good to ask everyone is where to have the 2024 meeting which will be the 100th AANP meeting.  We will be choosing the site in the next year or so.  One thought is to go expensive/luxurious (Hawaii anyone?) vs. traditional/historic (Atlantic City, NJ which is where the original AANP meetings were held).
at November 12, 2019 No comments:

Dr.Mich​elle Jorden, chief medical examiner for the county of Santa Clara in California, was recently featured in the American Medical Association's "Shadow Me" Specialty Series.

Dr. Jorden  has been employed in Santa Clara County since 2008. She obtained her medical degree from Northwestern, and did her anatomic and neuropathology training at Stanford. She did her fellowship in forensic pathology at the Cook County Medical Examiner’s Office in Chicago.


Carol Petito, a significant and distinctive member of the international neuropathology community, passed away on December 15, 2018 of a cancer she had been battling for 8 years.
Carol was born January 8, 1942 in Long Island, NY, the oldest of Charles and Marita Kaiser’s 3 children. She graduated with a BS from Tufts University and received her MD from Columbia University, College of Physicians and Surgeons in 1967, one of 10 women in a graduating class of 116. An internship at Bellevue Hospital was followed by residency in Pathology at The New York Hospital Cornell University Medical College and fellowships in neuropathology at Newcastle General Hospital in Newcastle-on-Tyne, England and with Ken Earle at the Armed Forces Institute of Pathology in Washington, DC.
After spending 1973–1992 on the faculty at The New York Hospital of Cornell University Medical College, becoming Professor in 1984, Carol moved to Miami in 1992 following her marriage to Michael Norenberg, a well-known and respected neuropathologist whom Carol had known for many years. She was a Professor of Pathology at Jackson Memorial Hospital of the University of Miami School of Medicine until her death.
A “triple threat,” Carol was equally and excellently competent at research, teaching and diagnosis. Her diagnostic abilities were especially remarkable considering that she lost an eye in a childhood accident but was never hindered by this. Her research productivity was augmented by the 26 grants she received at various times in her career. And her success as a teacher is well documented by her heavy schedule of medical and graduate student lectures, course directorships and several teaching awards. She was also Director of the University of Miami’s Pathology Residency Program for 10 years.
at October 25, 2019 No comments:

After earning her MD and PhD from Zagreb University in Croatia, Dr. Delalle joined the developmental neurobiology laboratory directed by Verne Caviness at the Massachusetts General Hospital (MGH). She then completed her residency in anatomic pathology and fellowship in neuropathology at MGH, after which she joined the faculty at MGH. She subsequently moved on to Boston University. Dr. Delalle starts work at Brown on November 1, 2019.
at October 24, 2019 No comments: 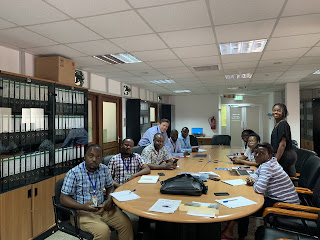