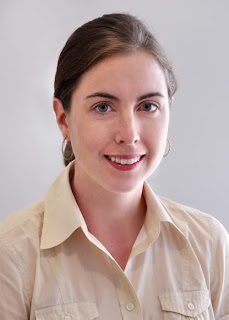 I recently received in the mail the College of American Pathologists' excellent Neuropathology Program CD-ROM, the first of two installments for the year. I've written about this product in the past; and I recommend it to trainees, general pathologists, and neuropathologists. Each installment consists of eight cases, four of which are linked by a particular theme. The current edition's theme (the CAP uses the term "symposium") is Masses in the Cauda Equina Region. The symposium introduction is written by Drs. Bette K. DeMasters and Hillary L. Somerset of the University of Colorado Health Sciences Center.(Dr. Somerset is pictured.) Included in the symposium introduction is a handy algorithmic representation for the differential diagnosis of cauda equina lesions. Good stuff!
at February 24, 2010 No comments:


You might counter that this is simply the result of a few bad-luck hits on the field, but research involving the University of North Carolina football team suggests otherwise. Players at UNC wear impact sensors in their helmets throughout the season. Results from these investigations suggests that even routine hits during practice can add up to cause concussions and, theoretically, set the stage for chronic traumatic encephalopathy. (On the first day of training camp one UNC lineman was recorded as having been hit in the head thirty-one times!)

What does this mean for football in America? Nothing. Fans are willing to spend a lot of money to see men slam into each other's heads on the field. But, as a parent, you can do something. You can forbid your son from playing football.
at February 17, 2010 1 comment:

Email ThisBlogThis!Share to TwitterShare to FacebookShare to Pinterest
Labels: Best of the Month series, neuropathologists, trauma

The preliminary program for the 2010 annual meeting of the American Association of Neuropathologists has been released. The meeting, to be held June 10-13 in Philadelphia, will feature a special day-long course entitled Hereditary Tumor Syndromes of the Nervous System: Clinical, Pathological, and Biological Updates. Of the topics to be covered in that course, I most eagerly anticipate the presentation by Dr. Alexander Judkins (pictured) entitled  "INI1: Syndromes and Diagnostic Neuropathological Applications". Since the World Health Organization has only in recent years recognized Rhabdoid Tumor Predisposition Syndrome and its association with the INI1 gene, it will be interesting to hear Judkins -- a recognized leader in this area of research -- talk about the evolution of this syndrome as a distinct nosologic entity. Also on the agenda is a Presidential Symposium entitled "Big Science" Neuro-Oncology: How can Neuropathologists Play Roles in Large-Scale Clinical, Translational and Basic Research? The Transition to Personalized Medicine. Its heartening to see the AANP addressing one of the key areas of transformation in pathology in the coming decades: personalized medicine. And, of course, the always-popular Diagnostic Slide Session of unknowns makes its return. So far, it looks as though we're in for a stimulating meeting!
at February 10, 2010 1 comment:

I blogged about Perry back in September regarding his impending move from Wash U in St. Louis, where he has spent the last 12 years, to the University of California at San Francisco. Perry starts as UCSF's neuropathology chief this summer. I assume they'll be giving him time off to collect his award at the Grammys.
at February 05, 2010 2 comments:

Best Post of September '09 - A Case of Cerebral Baylisascariasis 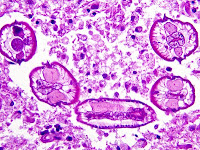 A loyal reader sent in this wonderful photomicrograph from a recent case of cerebral Baylisascariasis (click on the picture to see it up close). A cause of eosinophilic meningoencephalitis, infection with Baylisascaris procyonis is typically characterized by necrosis and eosinophilic inflammation. Larvae are often encapsulated within fibrous tissue (reference 1). Although not particularly neurotropic, the larvae may reach the central nervous system and cause major tissue damage.

Baylisascaris procyonis is an intestinal roundworm endemic to the US raccoon population. Humans are infected by ingestion of worm eggs in raccoon feces. The median age for human infection is just over one year old, consistent with the propensity of young children to explore their environment orally (surprising that this behavior has not been naturally selected out of humans over the millenia!). I came across only one report of clinical recovery after infection (reference 2). Otherwise, cerebral Baylisascariasis results in either severe neurologic damage or death. That being said, subclinical infection has been suggested by a study in Chicago, which found 30 (8%) of 389 children 1–4 years of age were seropositive for B. procyonis, although none had experienced symptoms (reference 3).