The American Association of Neuropathologists Website Committee was formed in 2014 and has worked diligently over the past two years to launch a new website this past June. The new website provides increased functionality for both site visitors (open access) and AANP members (with login required). AANP self-assessment modules will continue to be hosted through the previous webpage host, Dayspring, accessible at www.neuropath-education.org.

Of particular note is the heroic effort Dr. Doug Anthony has put in as chair of the website committee. He deserves a meritorious award from the AANP!


New data from the CDC shows the mortality rates for pediatric cancers is in decline. A study published by the CDC found that during 1999–2014, the cancer death rate for patients aged 1–19 years in the United States dropped 20%. What is also changing are the type of patients dying. In 1999, leukemia was the leading killer of childhood cancer. That has been replaced by brain cancer. Numerous other trends were also observed in the study.

In an editorial in the current issue of Archives of Pathology and Laboratory Medicine entitled Constructing Comments in a Pathology Report: Advice for the Pathology Resident, Drs. Stephen Smith and Martha Yearsley of Ohio State University provide important points to remember when crafting a surgical pathology report. Among the points the authors is one of my pet peeves: the inclusion of the statement "Clinical correlation is required." Well, OF COURSE CLINICAL CORRELATION IS REQUIRED! It is almost insulting to the clinician to state that he or she must integrate all pieces of data into the care of the patient. That is a doctor's job -- whether it be surgeon, internist, or pathologist! Here's what Drs. Smith and Yearsley have to say on the subject:

"The complex circuitry of many a pathologist's brain in the creation of pathology reports has, in many cases, reflexively routed diagnoses through a small subcortical box en route to signing out the report—a box requiring the addition of a controversial phrase: “Clinical correlation is recommended” (CCIR). The question of whether a pathologist should append this 4-word phrase is one of some depth; after all, is not the function of the pathologist to clinically correlate the specimen for evaluation? Indeed, pathology cannot be practiced in a vacuum, devoid of clinical information, lest the risk of diagnostic error become unacceptably high. So who should clinically correlate, and when?

"The answer to that question is the prudent pathologist. It is our responsibility to obtain clinical information before addressing the microscopy before us. In cases when no history is available, an effort should likely be made to contact the clinician, pending the diagnosis...

"Some cases, however, cannot avoid CCIR. Tissues exhibiting pathology with a nonspecific or undetermined etiology warrant a comment (eg, a skin biopsy exhibiting nonspecific dermal chronic inflammation). Often, it is preferred practice to augment the presentation of the differential diagnosis in these cases: 'Based on the clinical and histologic findings, a diagnosis of X is favored; however, the differential diagnosis includes…' Yet again, the prudent pathologist takes control and clinically correlates. Is CCIR needed in this context? Certainly not, given that the prudent clinician will then clinically correlate any pathologic findings presented in a report, understanding that the pathologist cannot be definitive. Indeed, perhaps CCIR is best reserved as a statement for saying 'I cannot interpret these histologic findings without directly examining the patient' or 'I do not have enough clinical information available to interpret the histologic findings before me.' Most often, this scenario arises when limited clinical history is available and nonspecific histologic findings are seen that would require an exceptional degree of assumption on the part of the examining pathologist to definitively interpret. Great caution should be taken in making such assumptions."

So, the phrase "clinical correlation is recommended" can be thought of as code for a certain degree of justified uncertainty. I don't believe that code should be used in a surgical pathology report. As in every aspect of life, telling it like it is makes the most sense.
at October 13, 2016 No comments:

Best Post of August 2016: The utility of TTF-1 immunohistochemistry in the diagnosis of sellar region masses

Email ThisBlogThis!Share to TwitterShare to FacebookShare to Pinterest
Labels: Best of the Month series, pituitary

I am please to present a guest post from the illustrious Dr. Howard Chang of Michigan State University, who presents a perplexing case. Dr. Chang would be interested in reader comments. He writes: "I can use some help from our colleagues.  Any advice (from anyone) on where and how to proceed for additional studies will be very much appreciated."


This is a case of a 12-year-old male with cerebral palsy, severe developmental delay (level 1-2 years), and seizures (stable, no seizure episodes since 2 years). He had progressive decline in neurological functions following flu-like illness. He received IVIG and steroids for clinical diagnosis of GBS-CIDP (18 months prior to death). Initially he showed some improvement, but neurological functions continued to decline, with multiple hospitalizations.  MRI imaging studies (2 weeks prior to death) showed extensive abnormal signal of the cerebral and spinal white matter. He was made DNR. A general autopsy including brain and spinal cord was performed.

Neuropathology Autopsy:
1. Extensive white matter atrophy-degeneration involving both the brain and spinal cord (leukoencephalomyelopathy) with:
A. Microcephalic brain (weight 1050 gm, normal should be about 1400 gm).

B. Bilateral cerebral white matter atrophy-degeneration, with extensive astrogliosis and loss of axons and myelin affecting the corpus callosum, and multifocal perivenous microcystic changes involving the centrum semiovale, subcortical white matter, with focal axonal spheroids in some of the microcystic areas.

C. Spinal cord with extensive microcystic degeneration of white matter tracts with loss of axons and myelin, affecting bilateral posterior, anterior and lateral columns.  Focal loss of neurons within the spinal cord gray matter is noted, including the anterior horn motor neurons and those in the Clarke’s nuclei.  The nerve roots appear relatively unremarkable.

D. Increased perivascular macrophages are noted within the brain and spinal cord sections, but there are no other areas of significant inflammation involving the brain or spinal cord parenchyma, or the nerve roots.  There is no obvious evidence of abnormal cytoplasmic inclusions within either the neurons or glia. 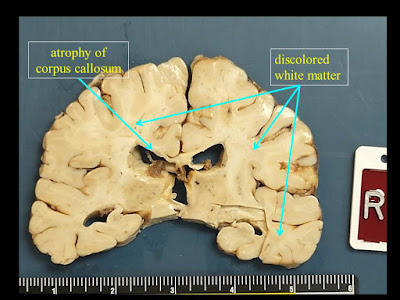 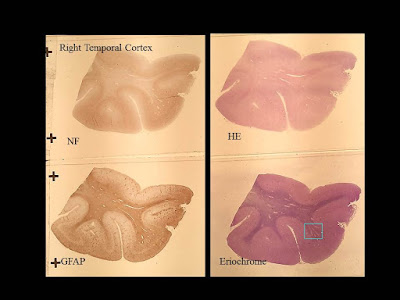 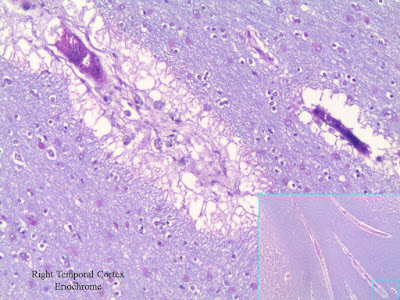 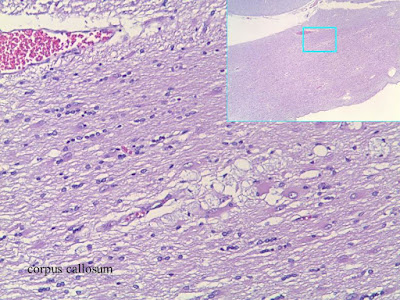 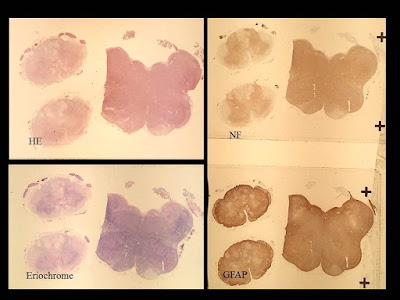 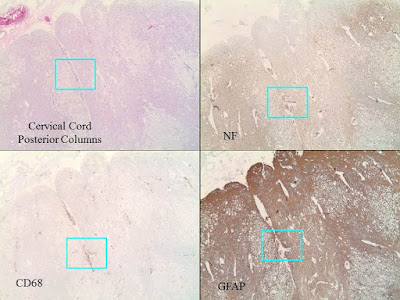 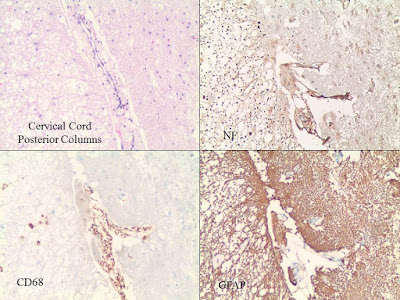 Mutant IDH1 and thrombosis in gliomas

Dr. Craig Horbinski of Northwestern University and colleagues just published a significant paper in Acta Neuropathologica entitled Mutant IDH1 and thrombosis in gliomas. Horbinski's data suggests that, quoting the abstract, "mutant IDH1 has potent antithrombotic activity within gliomas and throughout the peripheral circulation. These findings have implications for the pathologic evaluation of gliomas, the effect of altered isocitrate metabolism on tumor microenvironment, and risk assessment of glioma patients for venous thromboemboli." It should be noted that this paper won the Rubinstein Award at the 2015 American Association of Neuropathologists' meeting for Best Neuro-Oncology paper.
at October 03, 2016 No comments: