Extramedullary hematopoesis is not an uncommon finding in chronic subdural hematomas 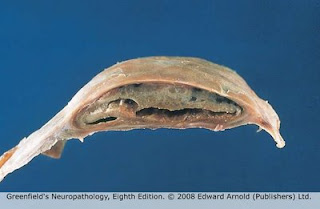 I received a case in consultation this week from a general pathologist who was concerned about clusters of unusual-looking cells within a chronic subdural hematoma (SDH), a specimen the surgeons call a "subdural membrane" (look at the picture above of a resected chronic subdural hematoma from Greenfield's textbook to see why surgeons use that term). I felt that the cluster of cells represented foci of extramedullary hematopoesis (EMH). Another general pathology colleague was doubtful that such a phenomenon was likely in an patient with no other hematological disorders. I countered that perhaps

25% of SDH cases in hematologically intact patients show EMH. This prompted an email to the illustrious Hopkins neuropathologist Peter Burger (pictured), who provided me with a reference to an 2007 article by Juan Rosai and colleagues. In their article, Rosai and friends cited a larger study by Muller et al. (reference 1) in which "a microscopic study of 130 chronic subdural hematomas... found nucleated red blood cells in 41 cases (32%). In a subsequent study, the same authors found erythroblasts in 33% of 38 cases, and this percentage increased to 57% after serial sections were taken." The Rosai article itself (reference 2) describes in detail two cases with the aim of documenting the fact that "such lesions can fool the 'general' surgical pathologists, including some who can hardly be regarded as 'junior'."
References:
1. Muller W, Zimmermann E, Firsching R. Erythropoiesis in chronic subdural hacmatomas. Acta Neurochir (Wien). 1988;93:137-139.
2. Kuhn E, Dorji T, Rodriguez J, Rosai J. Extramedullary Erythropoiesis in Chronic Subdural Hematoma Simulating Metastatic Small Round Cell Tumor. International Journal of Surgical Pathology 15:3 [July 2007] p.288-291.
at September 26, 2008 1 comment:

Brain of Oldest Person in the World is Autopsied 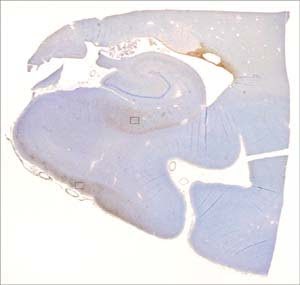 The choice for the Best Post of June '08 was an easy one, since I had only one post that month! Here it is:
I’m glad to be back in the blogosphere and will mark my return by noting a report brought to my attention by Dr. Chad DeFrain. According to an article in the May 28, 2008 issue of JAMA (299:20, p 2375-6), formaldehyde exposure seems to be a risk factor for amyotrophic lateral sclerosis (ALS). The author reports on data presented at this year’s of Neu 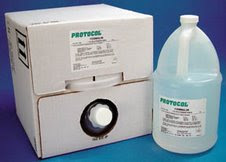 rology meeting in . (I attended that meeting, but missed this presentation. I must have been sitting by the hotel pool!) In any case, the link between formaldehyde exposure and ALS is based on a large prospective cohort study by Dr. Marc Weisskopf and colleagues at the Harvard School of Public Health. Researchers found a more than 4-fold increase risk of ALS among those who reported formaldehyde exposure over a course of more than ten years. Physicians were among the at-risk occupations for formaldehyde exposure. I suppose pathologists would be particularly vulnerable. If you look on the container of 10%-buffered formalin solution you use to fix your specimens, you’ll see that it is composed of 4% formaldehyde. Other at-risk occupations include laboratory technicians, morticians, firefighters, beauticians, and others. Yikes!
at September 19, 2008 4 comments:

Email ThisBlogThis!Share to TwitterShare to FacebookShare to Pinterest
Labels: Best of the Month series, neurodegen dz (other)

I read through the posts from May of 2008 for this entry in my "Best of the Month" series. I must give credit to Dr. Laura Rufibach for providing a great primer on LGMD2B and its cousin, Myoshi Myopathy:

I asked the good people at the Jain Foundation (https://www.jain-foundation.org/), an organization devoted to the treatment of Limb Girdle Muscular Dystrophy 2B/Miyoshi myopathy, to help me understand the difference between the two diseases. The Jain Foundation’s director of research, Laura Rufibach, PhD, gave the following informative response:

“There are 19 genetically defined forms of LGMD (6 dominant and 13 recessive). Clinically, many of the LGMDs are similar and the exact form can only be identified by protein screening or the identification of mutations. For LGMD2B, the “2” signifies the recessive nature of the disease and the “B” indicates that the LGMD is caused by a problem with the dysferlin protein.

“Miyoshi Myopathy is also a genetically heterogeneous form of muscular dystrophy with 3 different linked loci identified to date. At present, mutations in only one gene have been identified that are known to result in Miyoshi Myopathy. That gene, like LGMD2B, is dysferlin.

“Therefore from my perspective as a geneticist, LGMD2B and Miyoshi Myopathy (resulting from mutations in dysferlin) are the same disease and the variations in clinical presentation are the result of other modifiers (genetic or environmental) that have yet to be identified. Given this fact both LGMD2B and Miyoshi Myopathy could be treated with the same genetic therapeutic approaches (i.e. gene therapy, exon skipping, etc). This is why we include both types of patients in our patient registry."
at September 14, 2008 No comments:

Email ThisBlogThis!Share to TwitterShare to FacebookShare to Pinterest
Labels: Best of the Month series, muscle, websites

How many lobes does the human cerebrum have? 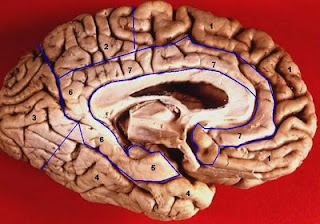 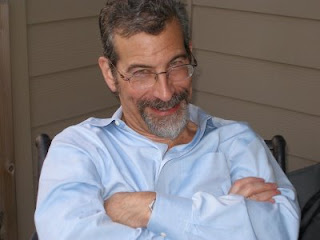 From time to time on Neuropathologyblog, we like to feature a prominent neuropathologist. My staff at the home office has been working overtime collecting data on one of our favorite neuropathologists: Dr. Doug Miller (picture courtesy of Doug’s wife, Sherry). As many of you know, Doug moved from New York City to God’s Country about a year ago. He’s happily working along with Dr. Doug Anthony at the University of Missouri School of Medicine. Except for a recent Achilles’s tendon tear, Doug has been getting along swimmingly at Mizzou. The injury has forced him to take elevators rather than the stairs to go up to frozen sections, but he gets there.

Doug’s big news is that he is close to finishing a surgical neuropathology textbook. Rather than deal with the uncertainties (and missed deadlines!) of editing a multi-authored text, Doug is writing the book entirely on his own. Doug gave me more details on the upcoming book in a recent email: “The book is divided into four parts: I Neoplasms, II Non-neoplastic Mass Lesions, III Biopsies for non-neoplastic diseases not presenting as a mass, and IV Epilepsy Pathology. Part I is further divided into brain and spinal cord sections, and then of course individual chapters cover the gamut of tumor types. While this is a text, not an atlas, it is also heavily illustrated, with hundreds of photographs organized into multi-part figures. All of this is in color except of course for a smattering of EM pictures and MRI or CT pictures, but the large majority of illustrations are photomicrographs in color, with H&E, special stains, and immunostains. As this represents a distillation of my work and teaching over the last 25 or so years I deviate here and there from dogma as espoused by the WHO and others, but I think this is going to be a good practical diagnostic textbook of use to neuropathologists in training and maybe occasionally in practice, to surgical pathologists at all levels, and perhaps also a useful reference for neurologists, neurosurgeons, oncologists, et alia. The publisher is Cambridge University Press, and the working title is “Modern Neuropathology” (their idea, not mine; I liked “Comprehensive Surgical Neuropathology”, but they are paying the bills…)” The book should be out in time for the American Association of Neuropathologists meeting next June in San Antonio, Texas. Neuropathologyblog will, of course, feature the book when it hits stores next spring.

Doug is known as someone who is willing to buck the trend and go his own way. In an era when single-authored texts are almost unheard of, Doug’s willingness to author an entire text by himself is a rather heroic act. He is indeed an inspiration.

One more thing: Doug is putting the finishing touches on his book and is looking for a picture of a pituitary adenoma with gangliocytic differentiation. If any readers have such a picture, I’m sure Doug would gratefully acknowledge the contributor. You can contact him at the University of Missouri Pathology and Anatomical Sciences Department. Best of luck, Doug!
at September 04, 2008 4 comments:

OK, this is a bit of a stretch for a neuropathology blog; but since ophthalmic pathology is generally within the purview (pun intended) of neuropathology, I thought I'd post on the topic. I was recently sent a pair of "pinhole glasses" to see if it would help to correct my myopia. The concept is quite simple: you look through a collection of tiny holes. The small holes refract the light enough so that you can actually see more clearly! This is not something you would wear while driving, since peripheral vision is restricted; but for safe indoor tasks, it works quite well! Here's a link to the site where the pinhole glasses are sold.
at September 03, 2008 3 comments: