A middle-aged patient with panhypopituitarism

The clinicoradiological suspicion in this case of a middle-aged patient with panhypopituitarism was hypophysitis.


Immunohistochemistry identified the larger pleomorphic cells as representing a large B-cell lymphoma, while the small cells were intermixed non-neoplastic T-cells.


Diffuse large B-cell lymphoma presenting as a pituitary mass is rare. A few case reports exist in the literature.
at November 28, 2018 No comments:

Dr. John Crary just informed me that his institution, Mount Sinai, has an unexpected opening for a neuropathology fellowship starting in July 2019.  Interested candidates can contact him at john.crary@mountsinai.org.

The exquisite cellular uniformity of the central neurocytoma 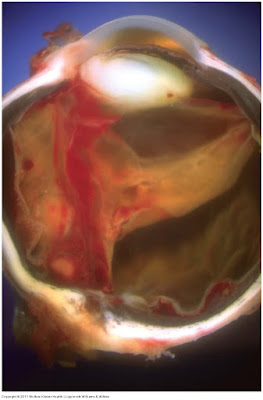 Ocular perforation caused by BB gun is a through-and-through injury with entrance and exit wounds in limbus and sclera, respectively. The track of the BB is marked by fresh blood. Posteriorly detached vitreous also contains ochre-colored degenerated blood.

Email ThisBlogThis!Share to TwitterShare to FacebookShare to Pinterest
Labels: eye

Q&A with Dr Peter Cummings, co-author of “Brainwashed: The Bad Science Behind CTE and the Plot to Destroy Football”

1.   Chronic traumatic encephalopathy has been considered by many to be a distinct nosologic entity since 1928, when Dr. Harrison Martland published the article “Punch Drunk” in JAMA. Do you believe that CTE is a distinct entity? If so, what, in your opinion, defines CTE?

That's a good question! If you look at the totality of the literature in a historical context, you see the 'classic' boxers neuropathological changes followed by the Omalu cases and then the McKee cases. Looking at all of these cases you can see that there is a wide spectrum of changes considered to be "CTE". Right now I think all we can say is CTE is a pattern; we don't know what causes it and we don't know what it causes. There are cases of CTE-like pathology in people who have never been exposed to repetitive head trauma and never had a head injury. The answer is probably more complex than we're able to say right now. There are extremist views (such as that expressed in a 2015 BMJ editorial) that suggest CTE doesn't exist outside of boxing and CTE as described in football players is an American social phenomenon. There is a lot more work to do in this area and we discuss that in the book.

2.   What’s your opinion of the work of Bennet Omalu as it pertains to CTE?

It's certainly historically important. After all, it's what really launched this whole conversation. We talk a little bit about it in the book. I do think there is some debate on whether or not some of his cases are CTE, but that might be a factor related to the wide spectrum of patterns said to be present in these individuals. I've always been curious as to why none of his football player cases were examined in the process to develop a consensus diagnosis. Again, that is something we discuss in the book.

3.   What conclusions drawn by Dr. Ann McKee regarding CTE do you have issue with?

I take issue with a number of things. First, I think the way the cases are portrayed in the media is disingenuous. In the CTE Center’s scientific papers, they assert that one cannot imply or conclude prevalence but then will go on to state in the media that they think every player has this. The CTE Center has also clearly stated in their papers that findings of a study should not  be used to inform safety and/or policy decisions in youth football but then proposes publicly in the media and in testimony before state legislatures that tackle football should be banned for kids under 14. It also bothers me when they put up a photo of an atrophic brain and claim it's severe CTE without any other qualifier. Over half of the 'severe' cases of CTE have another primary neurodegenerative disease, so when you look at those nice photos of atrophic brains, you have to wonder what other disease is lurking in there. Is it also Alzheimer’s disease? As stated by their very own consensus recommendations, if another neurodegnerative disease is present, it excludes CTE as the sole diagnosis. So, when the photos are shown in the media and they don't tell you it's Alzheimer's disease with CTE, it's disingenuous at best. Science doesn't stop at the paper, it continues into the public arena where it is used to educate the public. Here, it's not educating, it's fear mongering. I also have great concerns over the lack of transparency with information coming from the CTE Center. I described some of this in great detail in the book. For example, not turning over documents when presented with a signed release from a family; requiring a subpoena and then failing to turn over all the records; when I demand the missing records I am asked 'why am I drilling so hard? The NHL didn't drill this hard,'; and when I finally get the records, the names of the clinicians who reached the diagnoses are blacked out. Why? Additionally, the public should know that there exists cases where neuropathologists have looked at brains prior to the CTE Center and failed to find CTE, but when the brain arrive at the CTE Center, they all have CTE. This diagnostic discrepancy is alarming. There are many other examples in the book.

4.   The title of your book is rather sensational (“the plot to destroy football”). Are there actually people plotting a plan? If so, who are these conspirators?

I think we paint a pretty clear picture in the book of what is going on and how football has been targeted. For example, with the recent proposed legislation to ban youth tackle football in California, I found it outrageous that if the bill would have passed, an 8 year old in California wouldn't be able to play football, but could box or fight in MMA--sports designed to target the head. If this bill was really about brain health in kids, the coverage would encompass all areas of potential brain injury in all sports—not just football. The PR campaign accompanying the public release of the various CTE studies intentionally generate undue fear in parents and in the general public. The PR has intentionally tried to definitively link youth football to subsequent CTE-- and there is no scientific evidence of that. And for scientists involved in CTE research, who mind you, have no training, certification, or experience in youth football, to call out the sport for not responding is deceptive-- it's one of the reasons why I did become certified and I started to coach both flag and tackle and I would argue that no other youth sport has made a more radical transformation than youth football in response to safety concerns; I know this because I coach! Another example from the book is how some at BU have tried to silence me and discredit my opinions.

In the end "Brainwashed" is a very optimistic book full of hope and information which we hope will empower people. We wrote it as two dads asking the same questions a lot of other parents are asking and I think people who read the book will see that and realize it’s our journey for the truth for our own kids. In the end, we really hope people will have more information and be in a better position to make an informed decision as to whether or not a particular sport is right for their family.

Adenomas driven by the transcription factor SF-1, which are exclusively gonadotroph adenomas, are a common subtype encountered by the surgical pathologist. Traditionally, gonadotroph adenomas have been defined by positive immunostaining for luteinizing hormone (LH) and/or follicle stimulating hormone (FSH) with or without alpha-subunit (αSU). However, SF-1 alone can detect gonadotrophin adenomas. Further, the majority of previously classified "null cell" adenomas -- negative for all hormonal markers including LH, FSH and αSU -- are in fact positive for SF-1 and therefore better classified as gonadotroph adenomas.
at November 07, 2018 No comments:

The appendix is implicated in Parkinson’s disease

The appendix may contribute to a person’s chances of developing Parkinson’s disease. An analysis of data from nearly 1.7 million Swedes found that those who’d had their appendix removed had a lower overall risk of Parkinson’s disease. Also, samples of appendix tissue from healthy individuals revealed protein clumps similar to those found in the brains of Parkinson’s patients, researchers report online October 31 in Science Translational Medicine.

Together, the findings suggest that the appendix may play a role in the early events of Parkinson’s disease, Viviane Labrie, a neuroscientist at the Van Andel Research Institute in Grand Rapids, Mich., said at a news conference on October 30.

Symptoms related to Parkinson’s can show up in the gut earlier than they do in the brain. So Labrie and her colleagues turned their attention to the appendix. Often considered a “useless organ,” Labrie said, “the appendix is actually an immune tissue that’s responsible for sampling and monitoring pathogens.”

In the new study, Labrie’s team analyzed health records from a national registry of Swedish people, some of whom were followed for as many as 52 years. That long observation time was key: People have their appendix removed most often in their teens or 20s but, on average, don’t develop Parkinson’s disease until their 60s. More than half a million people in the registry had had an appendectomy, while a total of 2,252 people out of the 1.7 million developed Parkinson’s. Removing the appendix was associated with a 19 percent drop in the risk of developing Parkinson’s disease, the team reports.

Surgical samples from a tissue bank of appendixes from 48 people without Parkinson’s provided another link to the disease. The team discovered alpha-synuclein clumps in 46 of the samples — from both old and young patients — similar to those seen in the brains of Parkinson’s patients.

If the clumped protein in the appendix turns out to jump-start the disease, Labrie said, “preventing excessive alpha-synuclein clump formation in the appendix, and its departure from the gastrointestinal tract, could be a useful new form of therapy.”

Ongoing clinical trials are investigating different strategies to remove alpha-synuclein from the brain. If a new therapy could clear the protein from the brain, says UPenn neuropathologist John Trojanowski, perhaps it would do the same for the appendix.

The Special Course topic is: Unintended Consequences: The Iatrogenic Neuropathology of Systemic Therapies.

Register for the meeting here.

Best Post of October 2018: Young adult with an iridic mass extending into the ciliary body 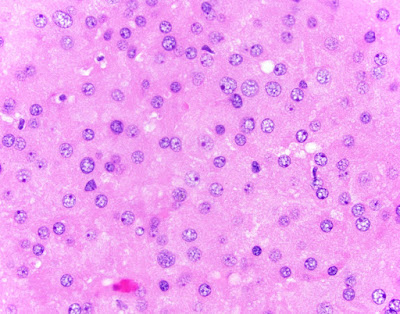 Melanoma markers were negative. Smooth muscle markers were positive. This case was determined to be an epithelioid leiomyoma. I didn't do electron microscopy to look for mitochondia, but it may well be what Ursula Schlotzer-Schredhardt et al. have called a mitochondria-rich epithelioid leiomyoma (Arch Ophthalmol, Vol 120, January 2002).
at November 01, 2018 No comments: