Best Post of May 2010: Free Samples of IDH1, the next big thing in glioma IHC, is now available

The next in our Best of the Month series is from May 13, 2010. Free samples of IDH1 may or may not still be available, but you can check with the company:

Dianova, the German company that makes anti-human IDH1 antibody for use in immunohistochemical staining of gliomas versus gliosis, is providing free samples of its product. Just go to the site, click on "free sample", and make a request via email. This marker may well be a tremendous advancement in distinguishing reactive astrocytosis from diffuse astrocytoma, so I would encourage you to get your free sample! Thanks to Drs. Craig Horbinski and Ty Abel for assisting me in discovering this opportunity.
at October 31, 2010 No comments:

Email ThisBlogThis!Share to TwitterShare to FacebookShare to Pinterest
Labels: Best of the Month series, immunohistochemistry, neoplasms

It's reported in the current issue of Clinical Neuropathology that Dr. Arie Perry has taken his now famous Neuropathology Songs to the international stage. He is pictured below performing his Creutzfeldt-Jakob song to adoring audiences at The XVIIth International Congress of Neuropathology in Salzburg, Vienna on September 11. Domestic listeners may remember his stirring Schwannoma song delivered at the American Association of Neuropathology annual meeting last June. Keep Rockin', Dr. Perry!! 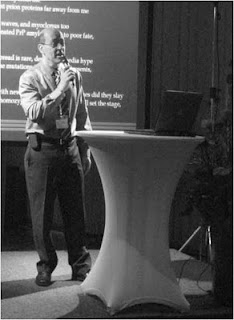 USA Today ran a story today about a simple blood test that the US Army has developed which may objectively test for the presence of concussion.   The Army collaborated with Banyan Biomarkers, a Florida-based company, to develop the test. In checking Banyan's website, it looks as though the test consists of a panel of immunoassays which include SBDP145, SBDP120, UCH-L1, MAP-2, GFAP. If this test turns out to be as good as the Army is implying, the implications for those on the battlefield (and on the football playing field, I might add) are enormous. If it pans out, I would agree with Gen. Peter Chiarelli, the Army vice chief of staff, who is quoted in the article as saying: "This is huge."

Thanks to Dr. Doug Shevlin for alerting me to this news story.
at October 15, 2010 5 comments:

Email ThisBlogThis!Share to TwitterShare to FacebookShare to Pinterest
Labels: biomarkers 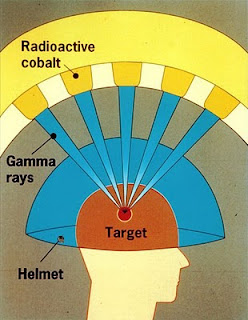 This is a guest post by Amanda who writes on behalf of the San Diego Gamma Knife Center, a shared resource for the San Diego neurosurgical and radiation oncology community.

Gamma Knife surgery has become one of the most popular and extensively tested types of what is known as “stereotactic radiosurgery”, or SRS. SRS (as depicted in the accompanying illustration) is a non-invasive medical procedure that uses highly focused radiation beams as a treatment for brain tumors and other kinds of intracranial maladies. Gamma Knife surgery has been used for treating trigeminal neuralgia, and the treatment of both benign and malignant brain tumors. But the Gamma Knife is not the only SRS system available. In recent years, the popularity and acceptance of radiosurgery procedures has led to the development of newer SRS systems. The most well known among these newer systems is the Cyber Knife. Both the Gamma Knife and the Cyber Knife can be highly effective in treating many of the same maladies, but they operate on patients in fundamentally different ways. Here is a brief comparison of the two SRS systems.

During Gamma Knife surgery, patients undergo a CT scan and sometimes also an MRI scan prior to the actual procedure. These scans are used by a team of specialists to plan out the radiosurgery in minute detail. Once the planning is finished, the patient is brought over to the Gamma Knife table and his/her head is fixed onto a rigid head frame that automatically positions the target area of the brain in the spot where the radiation beams will intersect. The Gamma Knife system then delivers approximately 201 highly focused cobalt-60 source radiation beams into a single target area of the brain. The beams are delivered all at once, multiple times and in short bursts. The procedure can last as little as 30 minutes and usually a single session is all that’s needed to complete the treatment.
Unlike the Gamma Knife system, which is designed exclusively for use in non-invasive brain surgery, the Cyber Knife system is designed to conduct SRS on lesions anywhere in the body, including organs that move with the patient’s respiration. It can do so because, unlike the Gamma Knife, it does not deliver the radiation beams to the target area simultaneously. Rather, it uses a single, high-energy photon beam that’s attached to a robot arm. The arm moves to different positions during the surgery, aiming at the target area from different angles. A head frame is not necessary either. Instead, patients are secured to the treatment table with a plastic mask that helps the Cyber Knife update the position of the skull in real time, allowing the robot arm to compensate for patient movement. More than one treatment session is sometimes required.

Both systems can be highly effective in the treatment of brain tumors and other intracranial maladies, but the Gamma Knife has a slight advantage when it comes to accuracy (0.5mm or less, as compared with the Cyber Knife, which can have an accuracy of almost 1mm). Also, the smaller size of Gamma Knife collimators makes it less likely that healthy brain tissue surrounding the target area will be damaged during surgery. The advantage of the Cyber Knife, however, is that its guided robot arm allows it greater versatility to treat other areas of the body and certain regions of the brain that are more difficult to treat using the head-frame method of the Gamma Knife.
at October 07, 2010 1 comment:

Email ThisBlogThis!Share to TwitterShare to FacebookShare to Pinterest
Labels: therapies

... or does everyone see extramedullary hematopoesis in the majority of their chronic subdural hematoma specimens? Here's yet another example that landed on my desk today: 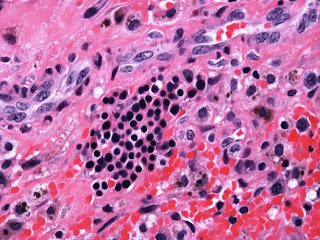