Why does the herpes virus love the temporal lobes?

After my recent lecture on infections of the CNS, Southern Illinois University medical student Mike Sinha came up to the podium to ask why the herpes virus had a predilection for attacking the temporal lobes. I passed Mike's question on to Dr. Tom Smith, the neuropathologist who provided the photographs (see above) of herpes encephalitis for Robbins and Cotran Pathologic Basis of Disease (7th edition). Dr. Smith wrote that the question is not completely resolved, but he directed me to a 2002 review article which addressed the issue (Journal of Neurology Neurosurgery and Psychiatry 2002;73:237-238). I quote from that article:

"Regarding the site specificity of herpes simplex encephalitis (HSE), the pathway of viral spread is probably more important than cell-type viral susceptibility. The unique anatomical localisation has been thought to result from entry of the virus via the olfactory pathway with spread along the base of the brain to the temporal lobes, a view that is supported by the immunocytochemical evidence of HSV antigens in the olfactory tract and cortex, as well as temporal lobes, hippocampus, amygdaloid nucleus, insula, and cingulate gyrus in patients dying from HSE. Another suggestion is that HSE may result from viral spread from the trigeminal ganglia to the temporal and frontal cortex, a view that is consistent with this known site of HSV latency."

Thanks to Mike Sinha for a provocative question and to Tom Smith for researching the response. 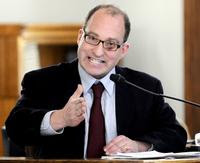 29-year-old father, Alex, was convicted last week of abusing his son. Dr. Cohen claimed that the multiple broken bones suffered by the infant were related to a condition known as methylenetetrahydrofolate reductase deficiency, an autosomal recessive disorder of folate metabolism. Despite defense testimony by both Cohen and forensic pathologist Dr. Jonathan Arden, the jury could not be convinced that Alex had nothing to do with his son's death. The neuropathologist hired by the prosecution was Dr. Robert Ross Reichard of the University of New Mexico. Legal experts say that it is unlikely that Alex will serve more than 16 years for his crime mainly because Alex's wife, Molly, is already serving 16 years in prison for knowing and reckless child abuse resulting in death. Sentencing for Alex Midyette will take place on April 20th.
at February 24, 2009 2 comments:

Best Post of November '08: Whither the Illusory Cowdry B Inclusion of Polio

And now for another installment of the "Best of the Month" series. In this post from November 13, 2008, I wrote about the alleged existence of polio-related Cowdry B inclusions. No one has yet been able to produce a photomicrograph of such an inclusion, despite having increased the reward from $10 all the way up to $12. Anyway, here's the post: