The following post appeared yesterday in Dr. Keith Kaplan's Digital Pathology Blog. I thought the message was important enough to re-post it here:

“What animates a great pathologist? Is it the desire to cure disease, to save life? Surely not, save perhaps as an afterthought. He is too intelligent, deep in his soul, to see anything praiseworthy in such a desire. He knows from life-long observation that his discoveries will do quite as much harm as good, that a thousand scoundrels will profit to every honest man, that the folks who most deserve to be saved will probably be the last to be saved. … What actually moves him is his unquenchable curiosity—his boundless, almost pathological thirst to penetrate the unknown, to uncover the secret, to find out what has not been found out before.”
— H. L. Mencken

Why did I choose pathology?  Why does anyone choose pathology as a medical specialty? Some of my thoughts on this were previously shared in “What a Beautiful Sea of Granulomas” this summer.
For me it was about the sense of discovery, the sense of making the unknown, known and helping people through the right diagnosis for the right treatment. As H.L. Mencken puts it, “to find out what has not been found out before”.

In medical school, the chair of pathology spoke to us the first day of second year in our first pathology didactic lecture and began his lecture with a transparency on an overhead projector (remember that?) by saying that “The hospital is the church, the pathologist is the priest”.  The next transparency went on to mention that the liver is the most important organ in the body saying there are brainless, gutless and heartless people but there are no liverless people, therefore the liver was the most important organ.  His interests and grant dollars focused on liver disease.

What about now?  In 2013, days from more announcements about more reimbursement cuts for pathology tests and services in 2014?  What motivates medical students to choose pathology?  Or will they avoid entering the field, instead drawn to specialties that society appears to value more if you measure value in CPT codes and reimbursements?

A well-known pathologist recently gave me the three reasons he went into and continues to practice pathology:
1.  90% of the work Pathologists do is interesting, only 10% is boring (Clinicians have the opposite %s)
2.  Can work in any area of medicine and with a broad focus across many organs, vs a clinician specialist in a single organ
3.  I don’t have to worry about non-compliant patients, i.e. patients not taking their medicine, etc.

And when asked about current frustrations in hospital-based Pathology:
1.  Lack of resources – bean counters slow progress for critical new initiatives
2.  We don’t get the attention/public attention for our work or value. Pathology is performed behind the scenes
3.  There’s WAY too much work

Another academic pathologist offered:
1. Pathology would still be my first choice in medicine due to the unique blend of imaging, daily challenging diagnostic dilemmas and access to and experimentation with cutting edge technologies almost on a continual basis.
2. One of the hidden exceptional values of Pathology as a specialty is the time it affords you to lead a balanced and fulfilling life as the demands are not nearly as pressing as those in other disciplines particularly surgery and medicine, yet you have potentially much more of a chance to impact patient lives if you do your job effectively and speak often to the clinicians and patients you serve (and not only with your reports).
3. Finally, pathology done effectively lets you directly be involved in many of the critical decisions that affect a patient’s life through continually educating those around you and at the same time being a vanguard for proper care delivery.  Done well you have the privilege of being a “doctor’s doctor”.  All other jobs and careers I have seen (both inside and outside of medicine), nothing compares to Pathology in terms of daily impact.  Want to have an impact?  Become a pathologist…the opportunities to lead are myriad.

That being said, this is what is holding Pathology back today:
1. Pathology needs to integrate instead of silo the many exciting moving parts under one roof.  Anatomic and Clinical Pathology are just too fragmented and need to work together more effectively and focus on patient centric reporting instead of a diarrhea of separate disconnected values.  Put the thinking back in our practice and focus on training pathologists as knowledge engineers, and de-emphasizing the toll booth mentality (for one piece of data you make sure you charge and get reimbursed for one RVU and you produce one report).
2. The Pathology societies, AACC, AABB, AANP, AMP, API, ASCP, CAP, USCAP and others, must work more effectively together to create “one international voice” for our specialty instead of focusing on their niche messages.  Today more than ever Pathology needs a clear message not white noise and cacophony of niche interests.  Every pathologist should attend the largest medical meeting in the world, the Radiology Society of North America (average attendance 87,000 with over 50% international attendees).  The brute force Radiology has accomplished with RSNA needs to happen in Pathology.  We pathologists can actually learn a lot from one another.
3. We need to attract the best and the brightest to our amazing discipline.  This should start with “pipeline” programs bringing high school students to our laboratories and then inviting them back summer after summer during their college and medical school years to do research and experience the pure joy of microscopy, advanced blood based diagnostics and pathology applied research that abound in each and every one of our pathology labs.  By opening the eyes of the best and the brightest to our discipline, perhaps we can start getting excited ourselves again about the magic that lies within our practice.  We need leadership and visionaries at the helm to ensure a bright future for Pathology and we need to start now.

My responses to the positives and negatives are below:
1.  I love the process of continual discovery that Pathology provides. Last week at a small hospital I saw for the first time in the operating room a patient with 4 ovaries.  Few specialties offer seeing something new daily.
2.  There is a very wide and endless variety in the work.
3.  I’m fascinated by histology.  The art of taking human tissue and processing it and sectioning it to make a slide and a diagnosis.
Current frustrations:
1.  Lack of resources
2.  Low professional stature
3.  Society doesn’t value Pathologists or the work we do

A new study published in the journal Science on Thursday and reported in the Washington Post suggests that a so-called "glymphatic system" seems capable of flushing toxins (including perhaps beta-amyloid) from brain -- particularly during sleep.“Sleep puts the brain in another state where we clean out all the byproducts of activity during the daytime,” said study author and University of Rochester neurosurgeon Maiken Nedergaard. (Thanks to avid NP Blog reader and friend, Dr. Doug Shevlin, for alerting me to this significant new finding.)
at October 22, 2013 1 comment:

Drs. Anne Buckley and Edward Bossen of Duke University have a nice review article in the current issue of Journal of Neuropathology and Experimental Neurology entitled Skeletal Muscle Microvasculature in the Diagnosis of Neuromuscular Disease. Buckley and Bossen bring attention to the often overlooked blood vessels in skeletal muscle biopsies. They state that "there are many vascular features in skeletal muscle biopsies that, when interpreted in the context of other histologic patterns and clinical history, provide useful information that allows muscle pathologists to narrow their differential diagnoses and provide more accurate guidance to treating physicians." In addition to discussing normal and abnormal muscle vascular histology, the authors discuss the vascular effects of factors common to many patients undergoing muscle biopsy, such as diabetes mellitus, hypertension, and aging.

Researchers from the Multiple System Atrophy (MSA) Research Collaborative in Japan just published online in the New England Journal of Medicine findings providing evidence that functionally impaired variants of the COQ2 gene (involved in the biosynthetic pathway for coenzyme Q10) are associated with an increased risk of developing MSA. This group previously identified multiplex families with MSA, indicating a genetic component in a disease that had previously been considered a non-genetic disorder.
at October 10, 2013 No comments:

Email ThisBlogThis!Share to TwitterShare to FacebookShare to Pinterest
Labels: Best of the Month series, molecular studies

Best Post of May 2013: Angulated intramitochondrial inclusions in the left leg of a man with a left-sided limp

Here's the next in our Best of the Month Series. No definitive diagnosis has been suggested since the original post on May 9, 2014:

A 59-year-old male with a one-year history of limping as well as pain, weakness, and paresthesia of the left lower extremity who underwent lumbar microdiscectomy with cord decompression. Although the patient's pain subsided post-operatively, his other symptoms persisted. Since his CPK levels were chronically elevated (around the 500's), biopsies were later performed on the quadriceps bilaterally. Light microscopic examination was underwhelming except for some denervation effect on the left. However, subsarcolemmal clumping was evident with NADH histochemisty on both the right and left. This clumping prompted me to perform an ultrastructural examination, which revealed the following angulated intramitochondrial inclusions IN THE WEAK LEG ONLY: 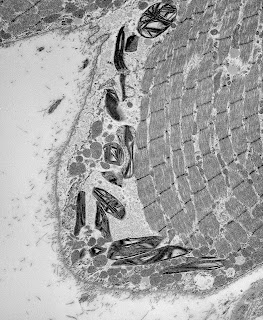 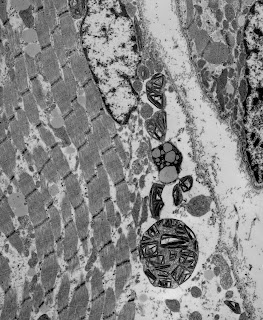 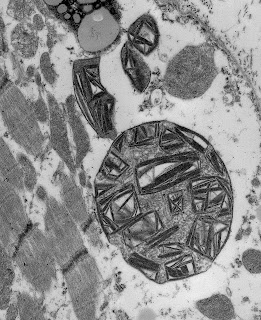 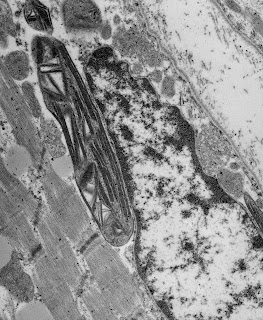 These inclusions were present in about 5% of mitochondria.  I reported out my findings in a descriptive manner, not certain of their significance. If anyone has seen such intramitochondrial inclusions in a specimen, please comment. As of now, the patient has no definitive diagnosis.
at October 03, 2013 No comments: