Something you don't see every day.... 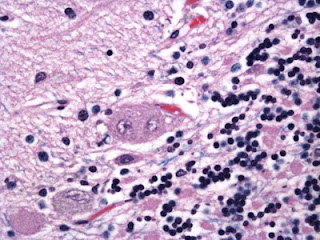 Email ThisBlogThis!Share to TwitterShare to FacebookShare to Pinterest
Labels: histology 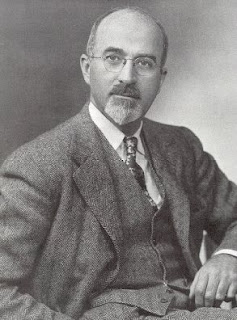 These procedures were designed to sever the connections of the brain with the prefrontal cortex. The goal was to leave patients with a degree of abulia, but with no focal deficits.
at September 28, 2010 1 comment:

Email ThisBlogThis!Share to TwitterShare to FacebookShare to Pinterest
Labels: Best of the Month series, people

Best Post of March 2010: A 'Rara Avis' has Flown Under My Microscope 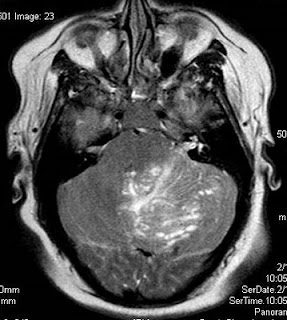 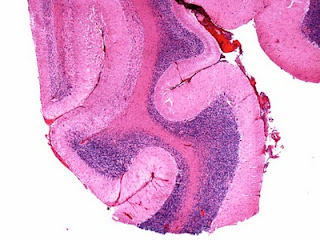 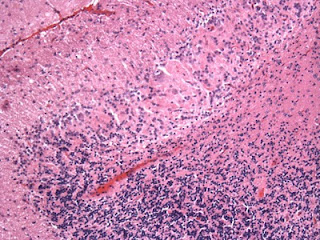 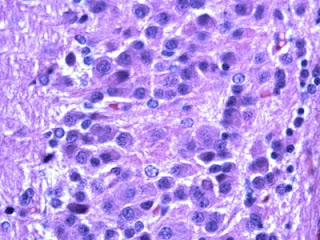 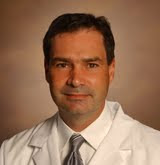 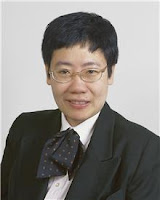 And now a recut slide of this rare bird gets filed away in my teaching set, only to be let out of its cage again by the eager inquiry of a resident.
at September 21, 2010 4 comments:

Another case of chronic traumatic encephalopathy in a football player

The Huffington Post reports today on the suicide of a University of Pennsylvania football player. Neuropathologists at Boston University performed a brain autopsy which showed chronic traumatic encephalopathy (CTE). The New York Times also reported on this case. The young football player's mother wanted to make the results public, saying "there's nothing trivial about this whatsoever. Anyone who thinks that this can be swept under the carpet is in for a big shock. It's a big implication here." The implication being, of course, that CTE contributed to the young man's depression which, in turn, led to his suicide. "How can you blame football for the kid's suicide?", one might ask. I don't think anyone is making that kind of simplistic connection. There is evidence that the young man had brain damage, and one might infer that it came from playing football. Perhaps brain trauma in an individual who is genetically predisposed to CTE may be a contributing factor leading to suicide. That speculation alone ought to be enough to make parents think twice before enrolling their kid in a football program.
at September 14, 2010 6 comments:

The University of Maryland is seeking a Neuropathologist

The University of Maryland School of Medicine, Department of Pathology invites applications for a Neuropathologist at the academic rank of Assistant Professor. Academic appointment and salary will be commensurate with experience and qualifications. Applicants must be board certified (or board eligible) in Anatomic Pathology and Neuropathology.

Clinical responsibilities in Neuropathology (shared with others) include intraoperative neurosurgical consultation and permanent section interpretation, muscle and nerve biopsy interpretation, autopsy brain examination and neuropathology consultation from a number of hospitals. Additional responsibilities may include the diagnosis of general surgical pathology specimens and participation in the autopsy rotation and outreach pathology activities.

The applicant will have demonstrated an academic active interest in basic or translational research, with a strong record of publication and an interest in teaching. Additional responsibilities include teaching of medical students, residents, fellows, graduate students and students in our Pathologists’ Assistants Program.

Applicants should forward their curriculum vitae, a brief statement of their scholarly and research interests and the names of three references to:

The Neurologist/Neuropathologist: Dinosaur or Dynamo?

This guest posts was authored by Dr. John E. Donahue, neuropathologist at Brown University School of Medicine. Dr. Donahue (pictured) is responding to a question raised by a neurology resident who considering doing a neuropathology fellowship. I would argue that, despite the potential professional hurdles such cross-training might present to the trainee, neurologists who practice neuropathology bring a fresh insight which dynamizes the subspecialty. Here are Dr. Donahue's thoughts :

I am a neurology-trained neuropathologist.  Many years ago, that was the norm; almost all neuropathology was done by neurologists.  They saw patients, cut brains, looked at slides, and taught.  Mass. General Hospital had neurology, neuropathology, and psychiatry as a single department until the late 1950's.
Nowadays, the neurologist-neuropathologist is going the way of the dinosaur, and I may be one of the last of my kind.  Neuropathology has been taken over by pathology in most places, and almost all neuropathologists are now pathology-trained.  For those that are still in medical school and contemplating neuropathology, as much as it breaks my heart to say this, I'd strongly consider going the pathology route from a pragmatic perspective.  In the 21st century, it's much easier to find a job this way.  For those that are already in a neurology residency and have their heart set on neuropathology, there are four distinct job possibilities that come to mind.  A certain amount of teaching, either to medical students, residents, fellows, or all of the above, is a requirement for most jobs in all of these categories.
1) Neuropathology (NP) only.  This is what I thought I was signing up for when I signed up for NP because the neuropathologist where I did my neurology residency did NP only.  However, come to find out, these jobs are extremely rare.  It would require being in an academic setting with a big enough neurosurgical volume to justify the expense of an NP-only person.  This is not a realistic possibility for most jobs.
2) NP/neurology.  Very few places have neurology and NP in the same department.  The New Jersey Neuroscience Institute in Edison, NJ comes to mind as one.  However, in the vast majority of institutions, NP is under the domain of pathology.  Thus, in order to pull off the NP/neurology combo, a lot of administrative creativity and flexibility are required.  You'd have to be paid by two departments and be beholden to two chairs.  Like NP only, this is not a realistic possibility for most jobs.
3) NP with anatomic pathology (AP).  In order to be board-certified in NP via the neurology route, in addition to the two-year NP fellowship, you have to do a minimum of one year of an AP residency.  If you do a second year, that would make you board-eligible in AP as well.  This would significantly increase your marketability and the number of pathology employers that would potentially be interested in hiring you.  In the 21st century, if you have your heart set on NP and don't mind examining "lower-organ" pathology, this would be my recommended route to the best job security.  Keep in mind that if you go this route, you're looking at EIGHT years of residency and fellowship after medical school graduation (one year internal medicine, three years neurology, two years NP, two years AP).  Can you tolerate being a trainee for that long?
4) NP-research.  If you have your heart set on neuropathology, hate "lower-organ" pathology, and/or don't want to spend eight years as a clinical trainee, then you most likely will have to go this route.  The only way for neuropathologists to generate substantial amounts of revenue without having to do AP is to bring in research grant money, either from NIH, private foundations, industry, or any or all of the above.  So you'd best attach yourself to a mentor during your residency and learn how to do basic neuroscience research, generate preliminary data, and submit a grant proposal.  With application success rates below 10% nowadays, this option is not for the feint of heart.  It really requires a genuine interest in bench research and a willingness to pick yourself up off the canvas and dust off after each rejection until you finally break through.  You'll also be doing seven postgraduate years of training after medical school (one internal medicine, three neurology, two NP, one AP).
That just about sums it up.  Good luck!
at September 01, 2010 2 comments: