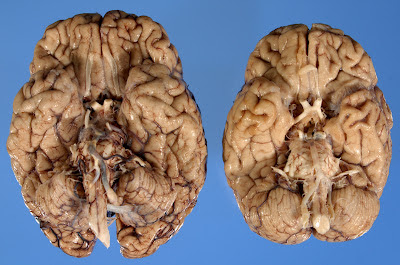 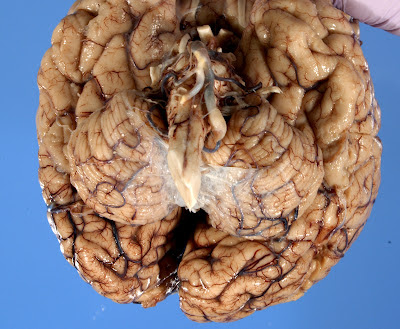 SCA6 is one several autosomal dominant cerebellar ataxias. SCA6 results from a CAG trinucleotide repeat expansion in the CACNA1A gene on chromosome 19p.
at August 21, 2012 No comments:

A case of renal cell carcinoma metastatic to a meningioma

A 74-year-old woman with a history of a seizure disorder had been followed for several years with a stable and unsymptomatic left parasagittal dural-based brain tumor presumed to be a benign meningioma. Recently, though, the lesion increased in size and hemorrhaged, leaving her significantly paretic on the right side. Neurosurgery thereupon performed a craniotomy for tumor removal. Intraoperative frozen section diagnosis was meningioma. But, upon receipt of the permanent sections, I was impressed by the staghorn vessels at low power and hemangiopericytoma immediately came to mind.
I was obviously dealing with a meningioma, but something else was going on in that area featuring the staghorn vessels. This region exhibited a different histomorphology:

Follow-up: The patient received radiation to the tumor bed and is recovering.

Does anyone recognize this guy at his recent Oberlin College 50th Reunion? 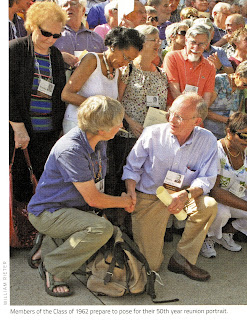 Thanks to the ever-vigilant Dr. Mark Cohen for providing this photograph.