The signature feature of sparsely granulated GH adenomas is the finding of widespread, ball-like, cytoplasmic ‘fibrous bodies’ on CAM5.2  in >70% of cells.

Email ThisBlogThis!Share to TwitterShare to FacebookShare to Pinterest
Labels: Best of the Month series, pituitary

Crooke cells in a touch preparation of a corticotroph pituitary adenoma 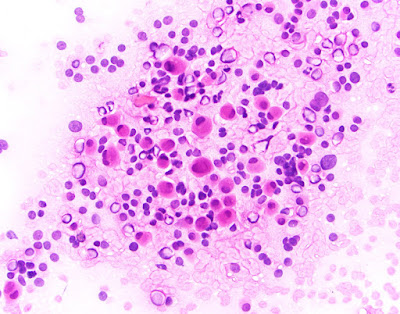 I am privileged to join the other members of the Neuropathology Committee of the College of American Pathologists at our biannual meeting this weekend in Chicago. Members and staff are pictured: 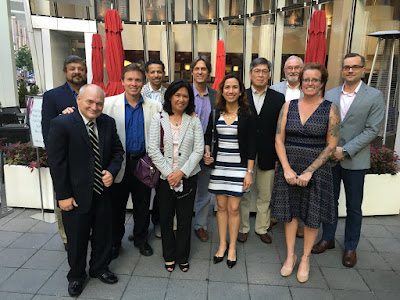 My all-time favorite post ever: Whither the Illusory Cowdry B Inclusion?

I have put up a grand total of 619 blog posts since this site got started back on October 31, 2007. I was recently asked which was my favorite. No question, my all-time favorite is about the illusory Cowdry B body. This post has even made it into the references for the Wikipedia page on Cowdry bodies. By the way, the reward of a 10 dollar bill which I posted six years ago to the person who sends me a picture of this structure still stands! I have no fear of being parted from my Jefferson as, in my opinion, the Cowdry B body is the Sasquatch of neuropathology. Here's the post from November 13, 2008: 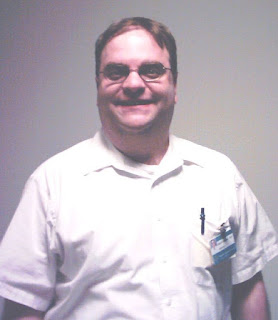 In a recent post about poliomyelitis, the illustrious Dr. John Donahue of  (pictured) correctly pointed out that I did not mention the presence of Cowdry B inclusions in my histological description of the disease. Having never seen polio under the microscope, I went looking in textbooks and on the web for a photomicrograph of a polio-related Cowdry B inclusion. Failing in my search, I turned to the esteemed Dr. Tom Smith of the  to see if he had such a picture. With his permission, I quote Dr. Smith’s email to me:

“I have the same problem you and everyone else seems to have -- I've never seen one myself and cannot find any photos of one either in my own file or anywhere in books or on the web. I remember reading a description a long time ago - I think it might have been from the old AFIP neuropath teaching slide set - that they were supposed to be small eosinophilic (?) nuclear inclusions that were sometimes seen in neurons in poliomyelitis. I don't remember actually seeing them in the slide in that teaching set. From the description, I had the impression they might have resembled Marinesco bodies or maybe even normal but prominent nucleoli... or perhaps those small inclusions seen in some neurodegenerative dementias. They don't seem to be as 'specific' as Cowdry A inclusions and perhaps they don't even exist? Frankly I think Cowdry B inclusions have reached the point where they should be relegated to the trashbin of neuropathology.” (Emphasis added.)

I recently photographed a Marinesco body (see picture, arrow points to the eosinophilic body) within the 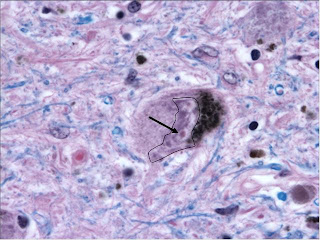 nucleus (outlined) of a pigmented neuron in the substantia nigra. Could the Cowdry B inclusion be an elaborate hoax perpetrated upon us by Dr. E.V. Cowdry when he first described Cowdry type A and type B inclusions in 1934? Dr. Smith’s response:
“Well, I doubt that it was a hoax but I think some of those folks were quite prone to seeing things that just the passage of time (and new information) has proved to be ‘not real’. Another case in point - how many Alzheimer type 1 astrocytes have you
seen?”

I then wrote back to the individual who got me started on this hunt for the illusory Cowdry B in the first place: John E Donahue, MD. Here’s what Dr. Donahue had to say about the issue:
“I think these descriptions are very old and go back to the day where everything was described visually, without knowing etiology. (Remember, there are eight structures of Scherer from the original 1938 article, only three of which are really relevant anymore, and maybe even the gliosarcoma being a tertiary structure may be going the way of the dinosaur since I've heard recently that the gliosarcoma arises from a single precursor cell)…” 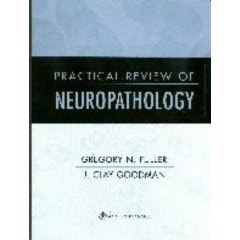 Fuller and Goodman, in Practical Review of Neuropathology (Lippincott, 2001), define a Cowdry B purely on morphological grounds -- with no implication as to the cause (polio or otherwise) -- as being small, eosinophilic, intranuclear inclusions with no halo and causing no nuclear effacement. I quote page 20: “[T]he quotidian Marinesco bodies that are routinely observed in the neurons of the pigmented brainstem nuclei are sterling examples of the Cowdry type B beau ideal.”


Perhaps the Marinesco body, rather than a “sterling example”, may in fact be the only example of a Cowdry B inclusion! Come to think of it, I think I’ll offer a $10 reward for anyone who can send me a photomicrograph of a polio-related Cowdry B inclusion. Email me the photo at brian.moore@ucdenver.edu

I hope you have better luck finding one than I did!

The current issue of the Journal of Neuro-Oncology features an paper by neuro-oncologist Jacob J. Mandel and colleagues entitled Impact of IDH1 mutation status on outcome in clinical trials for recurrent glioblastoma. The paper looks at whether patients with IDH-mutated glioblastoma have a higher 6-month progression-free survival (PFS6) or radiographic response (RR) on clinical trials for recurrence. With respect to PFS6, 24 patients were identified who had PFS6 and IDH results. Of those 24 patients, 5 had IDH-mutant GBM. A group of 24 controls without PFS6 also had 5 patients with IDH-mutant GBM. A similar result was obtained with regard to RR. Although median overall survival was 10 months better for the IDH-mutant group, the study determined that IDH mutation status was not predictive of PFS6 or RR in recurrent GBM for this data set. The authors conclude that their results "would seem to indicate that stratifying future recurrent GBM trials based on IDH1 mutation status or excluding pts with IDH1 mutated tumors may be unnecessary if including pts at various recurrences. However, our findings suggest that stratification of pts based on IDH mutation status may potentially be necessary for recurrent GBM clinical trials that limit patient enrollment to first recurrence."

A Case of Chordoid Glioma of the Third Ventricle

A man in his sixties presented with disequilibrium and hypothermia.

H3-K27M immunohistochemical positivity in a case of Diffuse Midline Glioma 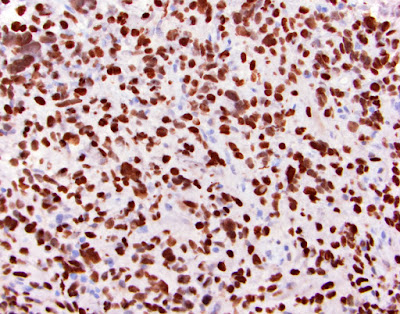