The Pittsburgh Pathology Informatics Summit is three weeks away

It's not too late to register for the 14th annual APIII pathology informatics conference that will be held on September 20-23, 2009, in Pittsburgh. APIII stands for "Advancing Practice, Instruction, and Innovation through Informatics". The conference brochure is available here. This event is the premier annual event in the field and should not be missed by anyone with even a passing interest in lab computing. All pathologists -- from surgical neuropathologists to clincial laboratory specialists -- should take an interest in informatics, as it will change the face of pathology in the 21st century. Lab Soft News Blog has more information on the conference.
at August 31, 2009 No comments: 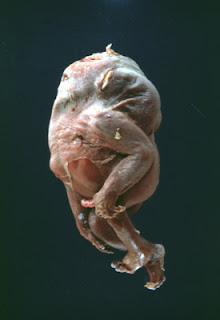 Iniencephaly is a rare neural tube defect involving the occiput and inion combined with rachischisis of the cervical and thoracic spine and retroflexion of the head. The first syllable of "iniencephaly" is derived from the word inion, which in turn is derived from the Greek word for 'nape of the neck'. The inion is the most prominent posterioinferior projection of the occipital bone of the skull. The inion appears to fuse with the spine resulting in no discernible neck.

This image is from the SUNY Upstate pathology department website.
at August 26, 2009 8 comments: 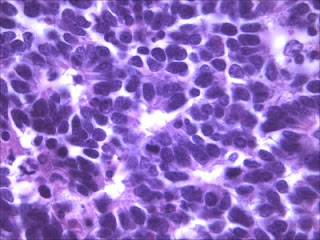 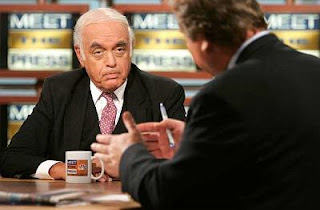 Last summer I reported that Robert Novak (pictured), reknowned conservative columnist, was diagnosed with a brain tumor. The tumor was discovered after an investigation into why Novak struck a pedestrian while driving in Washington and then failed to remember that he had done so. The Chicago Sun-Times now reports that Novak passed away at 4:30 a.m. today. He had been hospitalized between July 10 and July 24. Novak’s malignant brain tumor, the specific histologic diagnosis of which has not been reported in the press, was discovered July 27, 2008. (Thanks to Dr. Doug "Scout" Shevlin for alerting me to this story.)
at August 18, 2009 3 comments: 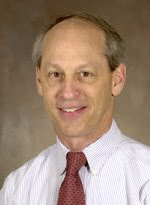 "[I]t is possible without surgery to deliver stem cells to the brain," says Dr. William H. Frey (pictured) of the University of Minnesota in the August 3rd issue of Neurology Today. According to the article, a team including Frey have shown that stem cells delivered intranasally in the rat can bypass the blood-brain barrier and make their way into the brain. This kind of delivery mechanism brings us one step closer to stem cell therapy for the central nervous system. The stem cells used in the study are of two types: bone marrow derived, and human glioma cells. Both types of stem cells were shown to reach the brain within an hour. "This could revolutionize regenerative medicine," said Frey. The original report appears in the European Journal of Cell Biology (Danielyan L, Shafer R, Frey WH, et al. Intranasal delivery of cells to the brain. Eur J Cell Biol 2009;88(6)315-324. E-pub 2009 Mar 25).
at August 14, 2009 No comments:

The American Cancer Society's recently published Cancer Facts and Figures 2009 reports that there will be 22,070 new brain and other nervous system cancers in the United States this year. That's 260 more cases than estimated for last year.
at August 09, 2009 3 comments:

Email ThisBlogThis!Share to TwitterShare to FacebookShare to Pinterest
Labels: facts and figures, neoplasms 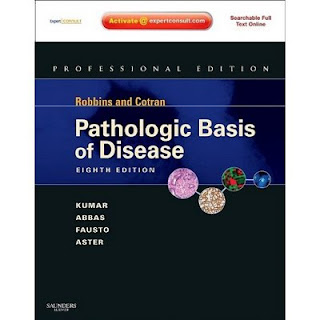 A new edition of the canonical Robbins and Cotran Pathologic Basis of Disease appeared recently and is no doubt being widely purchased by second-year medical students throughout the country as they begin the academic year later this month. I emailed the authors of the neuropathology-related chapters and asked them what was new and improved about the 8th edition. First, Douglas C. Anthony, MD, PhD of the University of Missouri Pathology Department (pictured below), who co-authored the chapters on the peripheral and the central nervous system with Drs. Matthew Frosch and Umberto DiGirolomi, had the following to say about the the new edition: 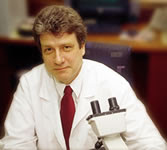 "The neuro chapters were quite an undertaking, trying to incorporate all the progress in neurosciences without making the new edition so big that it's unattractive to medical students. We tried very hard to keep it near the same size, and use more illustrations to keep it concise. One thing that we did throughout the 8th edition is to reduce the discussions of normal histology (only placing some of it where it's necessary to understand the pathology). So normal nerve, muscle, and brain are all removed. That allowed us to introduce more on advances in molecular understanding of all the pathologic processes. We have done that throughout, but in some places removed the text to create texts or figures. For example, hereditary sensory and autonomic neuropathies are expanded as a table, and the hereditary motor and sensory neuropathies as a figure with the myelin layers. For the limb-girdle muscular dystrophies, we listed all that were known at the time of press, and included others as separate hereditary myopathies. We included congophilic angiopathy with hemorrhages, and included a CADASIL figure, and expanded molecular classifications where they are pertinent to management, such as MGMT in glioblastomas and chromosome 1/19 in oligos. Where there was just too much to include in an introductory pathology text, we referenced more detailed papers or major texts, to send the interested student to those."

Next, I contacted Robert Folberg, MD (pictured below), ophthalmic pathologist and dean of the Oakland University William Beaumont School of Medicine in Michigan, for his take on the chapter he authored on the eye. His statement is as follows: 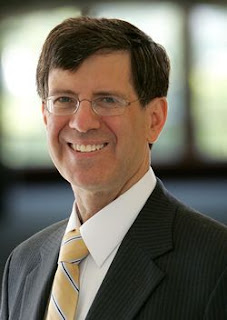 "The major revision [in the eye chapter] was the jump between the 6th and 7th edition. The chapter was revised completely during the 6-7 edition transition. The current chapter is a bit shorter - as are most chapters in the book - and the references and some concepts have been updated. There are no 'earth-shattering' changes between [the 7th and 8th editions]."

There you have it. I am sure I can speak for all of the readers of this new edition, both students and faculty alike, in expressing my appreciation for the countless hours of work that went into creating this text. I look forward to diving into it as the new academic year begins!
at August 02, 2009 6 comments:

Dr. Marc Del Bigio of the University of Manitoba was first in the line-up for an excellent forensic neuropathology symposium as a satellite ...