AANP 2012: Dr. Michael Norenberg talks about the multifunctionality of astrocytes

﻿
﻿The University of Miami's Michael Norenberg is currently talking about the functions and physiology of astrocytes. The forgotten function of astrocytes is that they are involved in the synaptic communication between neurons and are an active participant in modulating the neuron-neuron interaction. Dr. S. Ramon y Cajal speculated on this active participation of the astrocyte in the synapse with regard to sleep many decades ago. So, although not a new concept, the concept of expanded functionality of astrocytes has gained scientific support in recent years.
at June 23, 2012 No comments: 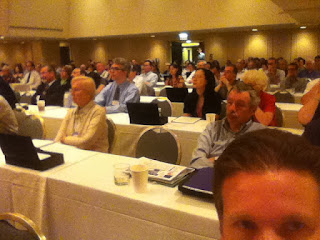 I am currently in attendance at the American Association of Neuropathologists Annual Meeting special course entitled Acquired Neuropathology in a Changing World. A crowd of more than 300 attendees are present. Dr. Leroy Sharer recently finished his presentation, entitled "AIDS Neuropathology - A 30 Year Perspective", which provided a unique insight into the evolution of our understanding of HIV in the CNS.
Meanwhile, the accomodations at The Palmer House Hotel here in Chicago are magnificent. 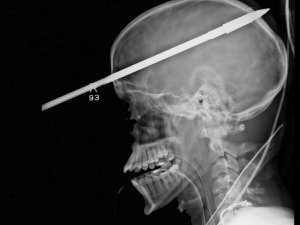 Above is an x-ray released yesterday by Jackson Memorial Hospital in Miami, Florida depicting a spear entering the head, traveling through the brain, and piercing the opposite skull surface of 16-year-old Yasser Lopez. The boy is on the road to recovery after being accidentally shot in the head while loading a speargun with a friend earlier this month

"It was about one inch above his right eye straight through," said trauma surgeon Dr. George Garcia. "You could feel the tip under the skin on the posterior part of the skull."

"The most important thing is to resist that temptation to pull the thing out," neurosurgeon Dr. Ross Bullock said. Bullock and his trauma neurosurgeon team determined the tip of the spear inside Lopez's head was actually a screw tip. "It was possible for us to figure out a strategy during the operation to be able to unscrew the tip of the spear, instead of having to get this whole spear dragged out through his brain," Bullock said.

Bullock said Lopez can speak normally. "He can, for example, he says he's not having pain. He's worried about the fact he can't use his left-side properly."

Lopez's story brings to mind that of Phineas P. Gage, whose left frontal lobe was obliterated by a railroad spike that exploded upward when he was tamping it down in 1848.

As for the day he got shot, Lopez knows nothing. Doctors expect him to make a near-full recovery.

Best Post of January 2012: The area postrema is not the only area where the BBB is lacking

I understand that the Area Postrema was a site where there was increased penetrability of the blood brain barrier. I am not sure, but thought I had come across additional sites of increased penetrability last year in my reading. Are there other sites where there is increased permeability of the BBB?
In pondering an answer to this question, I immediately thought of the illustrious Dr. John Donahue, consummate neurologist, neuropathologist, and neuroanatomist.  I posed the question to him and got the following response:

CNN reports today that a unified lawsuit on behalf of more than 2,000 National Football League players has been filed against the league in federal court, alleging that the NFL failed to acknowledge and address neurological risks associated with the sport and then deliberately failed to tell players about the risks they faced. The complaint unites the more than 80 pending lawsuits filed against the NFL.

Lawyers representing the players cited "dementia, depression, reduced cognitive ability, sleeplessness, early-onset Alzheimer's, and a debilitating and latent disease known as chronic traumatic encephalopathy" as some of the specific injuries caused by head trauma in the NFL.

Thanks to Dr. Jeff Bennett for alerting me to this story.
at June 07, 2012 No comments: