97% of Neuropathology Board Examinees Pass on First Try 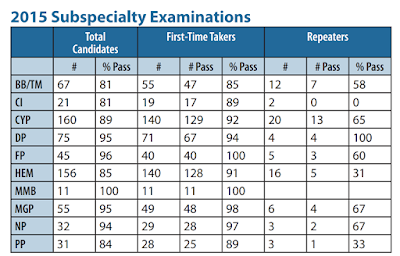 This chart released by the American Board of Pathology reveals that neuropathology (NP) fellows taking their subspecialty board examination should not be too worried about passing. In 2015, 28 out of 29 first-time takers passed. That's a lot better than those taking the statistically hardest board exam, blood banking/transfusion medicine (BB/TM), which had a 85% first-time pass rate.


The signature feature of sparsely granulated GH adenomas is the finding of widespread, ball-like, cytoplasmic ‘fibrous bodies’ on CAM5.2  in >70% of cells.

A 60-year-old man presents with acute confusion, aggressive behavior, and aphasia. Imaging reveals a heterogeneously enhancing mass (5 x 2 x 2 cm) in the left medial temporal lobe with extensive peripheral edema (image above), but no significant contrast enhancement. A subtotal temporal lobectomy was performed on suspicion of a low-grade glioma.

The diagnosis is herpes simplex encephalitis. PCR amplification of DNA from the specimen more specifically identified the causative agent as herpes simplex virus, type 1 (HSV1). The most common identifiable cause of viral encephalitis in hospitalized patients, HSV1 classically exhibits tropism for the orbitofrontal and temporal lobes bilaterally, but can on occasion present as a unifocal mass mimicking neoplasm as exemplified in this case. Untreated cases have a mortality rate of up to 70%, while in patients treated with a 14- to 21-day course of acyclovir the mortality rate is less than 10%. Although the patient in this case clinically improved while on a four-week course of acyclovir, he did not return to baseline functioning and was discharged to a nursing home.

Primary infection with HSV1 is usually subclinical. Symptomatic primary infection may manifest as gingivostomatitis, pharyngitis, or a mononucleosis-like syndrome. During the initial infection, the virus undergoes retrograde transport along sensory axons and becomes established in latent form in sensory ganglia, especially the trigeminal ganglion. Reactivation of latent virus produces recurrent mucocutaneous lesions most commonly involving the vermilion border of the lips (herpes labialis) that are recognized as cold sores or fever blisters. About one-third of herpes encephalitis cases are associated with primary infection, while the remainder result from reactivation of latent virus. It remains unclear whether viral reactivation occurs within the brain itself (herpes simplex viral DNA has been detected in normal brain) or in peripheral sensory ganglia, such as the trigeminal ganglion, with secondary axonal transport to the CNS. Olfactory pathways are also likely routes of retrograde viral transport. In contrast, HSV2 infection is more commonly encountered in newborns, acquired via genital infection from the mother during vaginal birth.

A hypercellular specimen with reactive astrocytes and occasional mitotic figures can raise the specter of astrocytoma. However, demonstration of extravasated blood and ischemic necrosis with infiltration by neutrophils, lymphocytes, and CD68-positive macrophages leads to a diagnosis of hemorrhagic necrotizing encephalitis.  Although the presence of haloed Cowdry A viral inclusions provide diagnostic reassurance (see photomicrograph), they are not always seen and are not specific to HSV. Immunohistochemistry for HSV1/2 is positive in infected cells.

This tumor could possibly be 50 years old

A 70-year-old gentleman presents with a temporal lobe mass. He was diagnosed with a seizure disorder way back when he was 20 years old, and has been on Dilantin since then. Over all these intervening years, he never underwent imaging -- until now. Breakthrough seizures prompted an MRI which showed a well-circumscribed solid and cystic mass. In retrospect, this indolent tumor may well have been present for decades.
at July 12, 2016 3 comments:

What is the current status of "atypical pituitary adenoma"?

What is the current status of "atypical pituitary adenoma" as a distinct entity? Currently, that designation remains in flux. Originally defined in the 2004 WHO Classification of Tumors of Endocrine Organs as a pituitary adenoma with "excessive" p53 immunoreactivity and a MIB1 proliferation index greater than 3%, the entity known as "atypical pituitary adenoma" has over time fallen into some disfavor. Since the literature on this entity is still evolving, some neuropathologists (including me) prefer to sign out such cases as "pituitary adenoma with elevated MIB1 proliferative index" with a comment suggesting that closer-than-usual clinical follow-up might be warranted. Finessing the diagnosis in this way may help the patient avoid automatic administration of radiation therapy while lowering the decision threshold to administer radiation at first recurrence.As for p53, use of that immunohistochemical index is even more controversial with some neuropathologists (including me) eschewing its use entirely in the setting of pituitary adenoma.

Cowdry A intranuclear inclusions in a case of herpes encephalitis 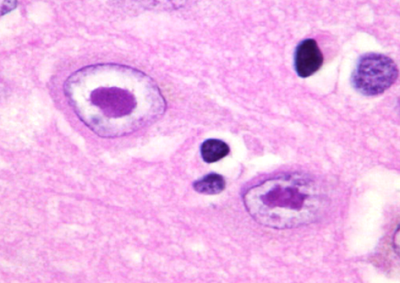 Does IDH1 immunohistochemistry have a slight cross reactivity with IDH2 mutation?


This WHO grade II oligodendroglioma had a slight blush of positivity for IDH1. Subsequent mutational analysis revealed an IDH2 mutation. It makes you wonder whether there is a slight cross reactivity of the immunohistochemical stain for IDH2 mutation. Anyone else have this experience?
at July 01, 2016 No comments: