A report appearing in the current issue of Annals of Neurology (2017;81:79-92) titled "Diagnostic and Prognostic Value of Human Prion Detection in Cerebrospinal Fluid" investigates the second-generation real-time quaking-induced conversion (RT-QuIC) prion test in a broad spectrum of prion diseases. The study concludes as follows: "The diagnostic performance of the improved CSF RT-QuIC is superior to surrogate marker tests for prion diseases such as 14-3-3 and tau proteins, and together with PRNP gene sequencing the test allows the major prion subtypes to be differentiated in vivo. This differentiation facilitates prediction of the clinicopathological phenotype and duration of the disease—two important considerations for envisioned therapeutic interventions." Among the authors are Aaron Foutz (first author), Mark Cohen, and Jiri Safar (senior author).
at January 25, 2017 No comments:

Thanks to Dr. Nick Willard for alerting me to this development.

STAT6 immunostaining shows strong nuclear positivity among tumor cells, while the cytoplasm is uniformly negative.  STAT6 nuclear immunoreactivity has been reported as a surrogate marker for the NAB2-STAT6 gene fusion, which is the defining driver mutation of solitary fibrous tumor/hemangiopericytoma. 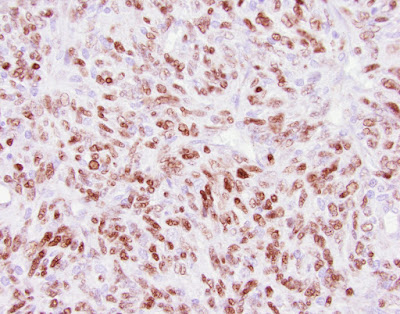 The implications of the description of Chronic Traumatic Encephalopathy continue to reverberate as yet another former professional football player states that he will not let his children play football. The Kansas City Star reported yesterday that former Heisman Trophy winner and Oakland Raider star running back Bo Jackson said he would not play football if he were growing up today and will not let his children play the sport.

“If I knew back then what I know now. I would have never played football. Never. I wish I had known about all of those head injuries, but no one knew that. And the people that did know that, they wouldn’t tell anybody,” Jackson said in an interview. He went on to say that he has encouraged his children to play "anything but football".

The NFL admitted in 2016 — after much hand-wringing and many denials and delays — that there is a link between football and CTE.

As a father of a 9-year-old boy myself, I communicated the same thing to my own son.

(Thanks to Dr. Doug Shevlin for alerting me to this development.)
at January 13, 2017 No comments:

This online, interactive courseware for the study of neuroscience is worth bookmarking. It's provided by McGovern Medical School at UTHealth in Houston. The project is under the direction of Neurobiology and Anatomy Chair John H. Byrne, PhD.