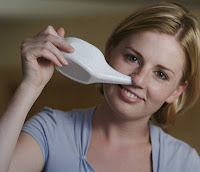 Now that it's winter and our noses and sinuses are being dried out by our heating systems, many of us turn to neti pots (also known as 'nose bidets'). The illustrious J. Clay Goodman, MD, neuropathologist at Baylor, just sent me an article from The Houston Chronicle warning people to use distilled, bottled, or boiled water. Officials in Louisiana are investigating whether a 51-year-old woman and a 20-year-old man both contracted the brain-eating amoeba Naegleria fowleri after using tap water in their neti pots. The disease, while rare, is most commonly contracted after inhaling water from a lake, pond or river. If investigators confirm the two victims died after using tap water from a neti pot it will be the first time the disease has been contracted from tap water.

Update on May 29, 2012: A comment was left in the original post suggesting that the water used in the two deaths may have resulted from the use of well water, not tap water. I was unable to confirm that contention in an internet search on the topic. All the news sources I consulted state that the water was indeed tap water.

Email ThisBlogThis!Share to TwitterShare to FacebookShare to Pinterest
Labels: Best of the Month series, infectious disease

CurePSP is an organization dedicated to raising public awareness of progressive supranuclear palsy (PSP). A member of the board of CurePSP, Justin Shea, is currently taking his parents on a tour of baseball parks throughout the nation in an effort to raise public awareness and funds for PSP. Justin, whose father was diagnosed with PSP in March of 2009, is documenting the family's journey with a blog. Justin writes: "[S]ince my Dad's diagnosis, we have been able to raise both awareness and considerable funds to help researchers find a cure... Collectively, we have raised over $30,000. We have decided to continue these efforts throughout the country by visiting every MLB park."
at May 24, 2012 No comments:

A Mild Case of Neurocystircercosis 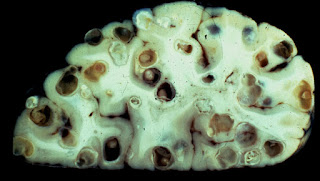 We neuropathologists, and society as a whole, has spent a lot of time over the last couple of years rethinking the long-term effects brain damage causes by repeated concussive and subconcussive blows to the heads of professional and college football players. But what about the 3.5 million kids in American who play below the high school level? Dr. Peter Cummings today sent me a link to a report regarding groundbreaking research being done at Virginia Tech in which impact-measurement instruments were placed on 7 and 8-year-old football players. Data was collected on more than 750 hits to the head over the course of the season. 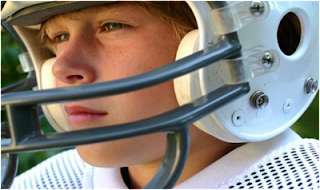 Lead researcher, Stefan Duma, a professor of Biomedical Engineering, reports that some head impacts in youth football are equal in force to some of the bigger hits he sees at the college level.  The average kid received 107 head impacts during the course of the season. This is few than seen in high school (which averages about 500 per season) and college (which amounts to about 1000 per season.). But what about the magnitude of these hits? The median impact was 15 g's. In Duma's study, there were 38 impacts that were 40 g or greater (almost all of which occurred during practice.) Six impacts were over 80 g's, which starts to get into the range of risk for concussion. “Nobody expected to see hits of this magnitude,” says Duma, who speculates that once players start seeing hits of 30 g's above, there is a risk for cumulative injury.

Here's the video report from reporter Stone Philips. The interviews with the parents of these youth players perplexed me. All of the parents featured found the results concerning, but none expressed any thoughts about having their child switch to another sport.
at May 14, 2012 3 comments:

"This is the single biggest change in education since the printing press."

On rare occasion, I stray from this blog's focus on clinical neuropathology to inform readers about new innovations in education. After all, we neuropathologists, almost by definition, are educators. I would therefore like to introduce a new direction in higher education that may indeed change the world. I am talking about edX, a joint venture between Harvard and MIT that will offer online learning to millions of people around the world for free. Anyone with an internet connection, whether you are a shopkeeper in Bangalore or a teenager in Modesto, will soon be able to take graded courses at MIT and Harvard while engaging with other online students and interacting with professors. MIT launched the prototype for this new innovation this spring with a course called "Circuits and Electronics". About 120,000 individuals worldwide registered for this single course -- a number approaching the total number of living MIT alumni! Anant Agarwal, MIT’s Director of the Computer Science and Artificial Intelligence Laboratory and new President of edX, had this to say about this new venture: “Online education for students around the world will be the next big thing in education. This is the single biggest change in education since the printing press.”

At this point, no degrees will be granted, but students will receive certificates verifying completion of a course.

At the press conference announcing the launch of edX, Harvard Provost Alan Garber said:  “We believe in not only producing educational courses online, but using this as literally an unprecedented opportunity to examine fundamental questions about how we learn. This is not only about how to design the best online courses. This is about learning how to use the classroom more effectively… It’s enabling us to ask very different questions than we’ve typically asked before. For example, we need not only ask how will our students do on an exam, we can begin to ask questions about how well they acquire and apply the information months after the course has ended… This is a platform that will enable us to do research that simply hasn’t been possible before.”

There no doubt that this new endeavor will change the face of education, democratizing and radically diffusing knowledge and intellectual discourse. EdX is the beginning of a new way of teaching and a new way of learning, and the change will extend to medical education, including neuropathology education. This should be interesting.....
at May 04, 2012 1 comment:

Email ThisBlogThis!Share to TwitterShare to FacebookShare to Pinterest
Labels: education and training, websites


Neuropathology took center stage at the Society for Neuro-Oncology (SNO) meeting today as Dr. Kenneth D. Aldape, neuropathogist at the University of Texas MD Anderson Cancer, was introduced as the next president of the society. Dr. Aldape also delivered an address to more than 1400 attendees about the future of surgical neuropathological reporting. Aldape's research centers on the clinical utility of brain tumor biomarkers as prognostic indicators. He described how the use of biomarkers will change the way surgical neuropathology diagnoses are rendered. He noted that the broad morphologic spectrum one sees in gliomas makes the recommendations of the World Health Organization sometimes difficult to implement. For example, the difference between a WHO grade II and grade III astrocytoma is based principally on whether or not mitotic figures are "brisk" as interpreted by the examining neuropathologist. Yet, the imprecision of that approach is obvious when one considers variables such as the diligence of the neuropathologist in identifying mitotic figures, the often equivocal morphology of apoptotic-versus-mitotic cells, as well as the variable technical quality of tissue processing and staining. The use of biomarkers will make diagnoses more reliable and will provide more useful prognostic information to the oncologist. Dr. Aldape projected onto the screen an example of a recent surgical pathology report he had generated at MD Anderson. The report highlighted the status of the several biomarkers, including G-CIMP, IDH1, pHH3, MIB1, 1p/19q deletion, and MGMT. Then, only in the last sentence of the comment, was it noted that the histology and biomarker profile was most consistent with a WHO grade III (anaplastic) astrocytoma. It was as if the WHO diagnosis and grade were a perfunctory afterthought. Finally, Aldape noted that biomarkers will become even more important in the coming years as biomarker data becomes "actionable", allowing the oncologist to personalize the treatment of a particular tumor depending on the biomarker profile. These are exciting times....
at May 03, 2012 No comments: