I'd like to share with you this email, which I received from the illustrious Dr. Charles Eberhart this morning:


Hi Brian,
I was curious what other neuropathologists thought about the issue of brain tumor cells transdifferentiating into endothelium and making up significant proportions of the growing vasculature. As you may know, last year two high profile papers stated that half or more of vascular endothelial cells in brain tumors derived from genetically altered neoplastic cells. This seemed inconsistent with our clinical experience, and four of us recently published a report expressing our views. I would be curious to know what other practicing surgical neuropathologists thought, and your blog might be one forum in which to have that conversation. This is one area where I believe that practicing pathologists have something to teach basic scientists.
Regards,
Charles Eberhart, MD PhD
Professor of Pathology, Ophthalmology and Oncology Director of Neuropathology Chief of Ophthalmic Pathology Johns Hopkins University School of Medicine

Please post your comments. If for some reason you are unable to access the article through the link provided above, here is the reference and abstract: 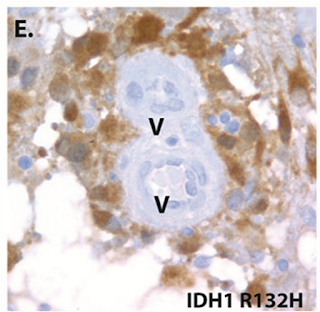 Microvascular proliferation is a key biological and diagnostic hallmark of human glioblastoma, one of the most aggressive forms of human cancer. It has recently been suggested that stem-like glioblastoma cells have the capacity to differentiate into functional endothelial cells, and that a significant proportion of the vascular lining in tumors has a neoplastic origin. In principle, this finding could significantly impact the efficacy and development of antiangiogenic therapies targeting the vasculature. While the potential of stem-like cancer cells to form endothelium in culture seems clear, in our clinical experience using a variety of molecular markers, neoplastic cells do not contribute significantly to the endothelial-lined vasculature of primary human glioblastoma. We sought to confirm this impression by analyzing vessels in glioblastoma previously examined using chromogenic in situ hybridization (CISH) for EGFR and immunohistochemistry for mutant IDH1. Vessels containing cells expressing these definitive neoplastic markers were identified in a small fraction of tumors, but only 10% of vessel profiles examined contained such cells and when identified these cells comprised less than 10% of the vascular cellularity in the cross section. Interestingly, these rare intravascular cells showing EGFR amplification by CISH or mutant IDH1 protein by immunohistochemistry were located in the middle or outer portions of vessel walls, but not amongst the morphologic boundaries of the endothelial lining. To more directly address the capacity of glioblastoma cells to contribute to the vascular endothelium, we performed double labeling (Immunofluorescence/FISH) for the endothelial marker CD34 and EGFR gene locus. Although rare CD34 positive neoplastic cells unassociated with vessels were identified (<1%), this analysis did not identify EGFR amplified cells within vascular linings, and further supports our observations that incorporation of glioblastoma cells into the tumor vessels is at best extremely rare, and therefore of questionable clinical or therapeutic significance.


Drs. John Donahue and Ed Stopa sent in the photomicrograph below from an article they published in 1999 describing a benign meningioma. They conclude: "In this case, another factor in favor of the tumor being benign is that its nuclei are smiling (arrow)." 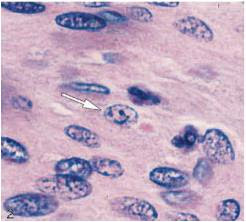 Email ThisBlogThis!Share to TwitterShare to FacebookShare to Pinterest
Labels: Best of the Month series, neoplasms


The University of Connecticut School of Medicine/Hospital for Special Care Neuromuscular Fellowship is offering an ACGME accredited one-year program emphasizing clinical bedside and clinical research experience. The primary site is based at University of Connecticut Health Center, John Dempsey Hospital in Farmington, Connecticut. The other major participating site is Hospital for Special Care, New Britain, CT, and Connecticut Children's Medical Center in Farmington, CT. The fellow will be exposed to a full range of emergency, inpatient and outpatient management of neuromuscular disorders. Neuromuscular teaching will take place through didactic sessions scheduled throughout the year, inpatient consultations, adult and pediatric EMG and neuromuscular clinics. Contact Agnes Jani-Ascadi, MD at jani-acsadi@uchc.edu for more information.

Landreth scores a hit against Alzheimer's with bexarotene

Tomorrow’s edition of the journal Science will report on how Professor Gary Landreth, about whom I recently posted, and his team discovered that the cancer drug bexarotene can quickly reverse Alzheimer’s symptoms in animal models. Within 72 hours of administration, the medication  halved the number of plaque deposits closely associated with this degenerative brain disease.  Additionally, the signs of cognitive and memory deficits disappeared within that same brief time period.

Time to put the NIA-Reagan criteria for the neuropathologic diagnosis of Alzheimer's behind you and revise your autopsy reports to reflect the consortium report by the National Institute on Aging and Alzheimer's Association (the NIA-AA criteria). Neuropathologist Tom Montine, MD, PhD headed up the effort to revise the 1997 criteria. According to Medscape News, Montine said there were three main points to be made regarding the new criteria:
'"The first is that it's no longer necessary that someone carry a clinical diagnosis of dementia in order to make a pathological diagnosis of [AD]. We have separated those 2 entities because we now understand that there is a preclinical stage of the disease. That's the major philosophical point... The second point is more on the technical side," he said. The guidelines recommend the "ABC" staging protocol for the neuropathologic changes of AD, based on 3 morphologic characteristics of the disease: A is for amyloid, B is for Braak neurofibrillary tangle staging protocol, and C is for the Consortium to Establish a Registry for AD neuritic plaque scoring system. For all cases, regardless of clinical history, the guidelines state that reporting should follow the format of these examples: 'Alzheimer Disease Neuropathologic Changes: A1, B0, C0' or 'Alzheimer Disease Neuropathologic Changes: A3, B3, C3.' The ABC score is then transformed into 1 of 4 levels of AD neuropathologic change: not, low, intermediate, or high." The third point deals with comorbidity. Although AD is the most common cause of dementia and can exist in a "pure" form, it commonly coexists with pathologic changes of other diseases that can also contribute to cognitive impairment, the document notes. The most common comorbidities are Lewy body disease, vascular brain injury, and hippocampal sclerosis, as well as other neuropathologic changes such as argyrophilic grain disease and TDP-43 inclusions. The new recommendations more explicitly define the manner in which these comorbidities are to be evaluated.

Dr. Mark Cohen tells me that a guy worth watching on the Alzheimer research front it Dr. Gary Landreth from Case Western Reserve University. And, as anyone who reads this blog regularly knows, when Mark Cohen talks, I listen. According to the Alzheimer Research Forum (from which I am blatantly plagarizing in the remainder of this post),  Landreth works on ApoE-directed therapeutics. As one of the genes involved in cholesterol homeostasis, ApoE is regulated transcriptionally by receptors which form heterodimers with the retinoid X receptor (RXR). Working with APP transgenic mice, Landreth found that an RXR agonist, bexarotene, induces brain ApoE quickly and robustly. This induction precedes a rapid decline in brain amyloid, an increase in plaque-clearing microglia, and improvements in cognitive performance. Landreth noted that bexarotene is an FDA-approved chemotherapeutic that readily crosses the blood-brain barrier and has minimal side effects, most of which are associated with its action on lipid homeostasis. Hence, this drug minimally represents a test of the role of Aβ in AD and, maximally, may represent an AD therapeutic. These finding raise the question of the utility of the drug in ApoE4-positive individuals. You go, Gary!
at February 05, 2012 No comments: