At the suggestion of the reader Library Staffer, and inspired by Digital Pathology Blog as well as Dr. Doug Shevlin, Neuropathology Blog has gone Twitter. My periodic tweets will appear on this blog in the right-hand column; and, conversely, blog post titles (with a link to the post) will appear on my Twitter account. Twittering is a trend that cannot be resisted: The New York Times calls Twitter "one of the fastest-growing phenomena on the Internet." Who am I to swim against the tide?
at January 30, 2009 3 comments:

The Pool of pathology bloggers increases by one this month

I was gratified to see another pathologist recently join the ranks of bloggers posting about the profession. Dr. Doug Shevlin recently alerted me to the inauguration of a blog by a blue-collar surgical pathologist, Dr. Mark Pool, working in the trenches at a hospital in Kankakee, Illinois. Pool's blog is barely a month old, and has already garnered a mention on the popular Digital Pathology Blog! I can tell you this: I've never seen the word "polyphyletic" used in a blog before -- never, that is, until Dr. Pool's lovely post on reactive urothelium. This Pool is deep!
at January 28, 2009 6 comments:

A 69-year-old woman presented with a brain mass that was thought to be a primary brain tumor. Instead, our diagnosis turned out to be Diffuse Large B-Cell Lymphoma, Anaplastic Type. This is not a lymphoma that is restricted to the central nervous system; but thus far in this patient the malignancy has only shown up in the brain. A representative photomicrograph from this case illustrates how ugly these tumor cells can be: 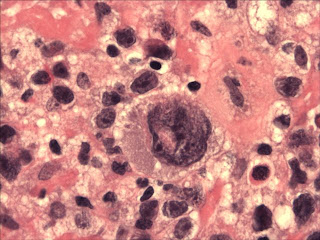 The market for clinical neuropathologists is still pretty good -- if you are willing to move. If you're a pathology or neurology resident looking at the last minute for a fellowship spot, you might consider the following programs which are still looking to fill two-year neuropathology

There may be other programs out there looking to fill for July of this year, but I could only get reliable confirmation from the above four programs. As you can see, you have some options if you're willing to live in New York City. Good luck!
at January 21, 2009 5 comments:

With all the hullabaloo surrounding the 2007 revision of the World Health Organization Classification of Tumors of the Central Nervous System (4th edition), the fact that the WHO consensus committee also recognized a new genetic syndrome got lost in the mix. Here's the scoop on the new syndrome:

Rhabdoid Tumor Predisposition Syndrome (RTPS) is characterized by a germline mutation in the INI1 gene (chromosome 22q11.2) and manifested by a marked predisposition toward the development of malignant rhabdoid tumors of infancy and early childhood. The atypical teratoid/rhabdoid tumor (AT/RT) is by far the most common CNS malignacy associated with this syndrome. Up to one-third of AT/RTs are thought to arise in the setting of RTPS. Other tumors that have also been reported in association with this syndrome include: medulloblastoma, choroid plexus carcinoma, primitive neuroectodermal tumors (PNETs), and malignant rhabdoid tumor of the kidney. Because of the risks associated with RTPS, it is recommended that the germline status of the INI1 allele be investigated in each new case of AT/RT.

Reference: Brat, Daniel J., et al. "Surgical Neuropathology Update: A Review of Changes Introduced by the WHO Classification of Tumors of the Central Nervous System, 4th edition" in Archives of Pathology and Laboratory Medicine: 2008;132: 993-1007).
at January 18, 2009 2 comments: 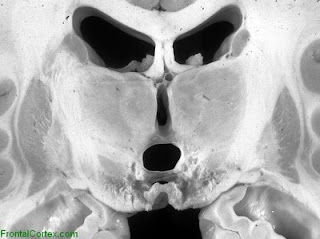 In response to a post I wrote last week (January 7) on Leigh's disease, our loyal but anonymous reader Gliageek, also know as Agent86, sent me a link to FrontalCortex.com for photographs of the cavitatary devastation perpetrated by Leigh's disease. An example from that fine website is shown above, which depicts cavitation of the subthalmic region in a coronal brain autopsy section of a patient who suffered from Leigh's. To me, the most striking aspect of this disease is the exquisite symmetry of the lesions it leaves behind.
at January 16, 2009 No comments:

This case came to me in consultation from an outlying hospital. It was an enhancing, dural-based mass on MRI. The referring pathologist wondered whether it was a supratentorial hemangioblastoma. The ultimate diagnosis, though, was angiomatous meningioma, a World Health Organization (WHO) Grade I tumor. Grade I tumors are generally well circumscribed, slowly progressive, and can often be cured by resection alone. The photomicrograph of the tumor below shows the meningothelial cells interrupted my numerous blood vessels. 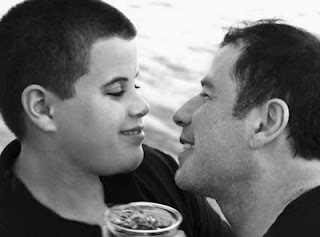 Everyone has heard about the tragic death of 16-year-old Jett Travolta (pictured with his dad, actor John Travolta) presumably as a result of a prolonged seizure. It's also public knowledge that Jett Travolta suffered from Kawasaki's disease. It's unclear that there was a connection between Kawasaki's disease and his seizure disorder. There's some evidence, however, that there may be a connection between seizures and Jett's possible autistic disorder. The Travoltas reportedly didn't acknowledge the possibility that Jett had autism, perhaps because their faith (Scientology) does not recognize autism as a legitimate entity. An autopsy is being performed, the results of which are unlikely to be released. But I doubt that an autopsy would shed light on any of these questions anyway. An autopsy may show an anatomic substrate for a seizure disorder (cortical heterotopia, hippocampal sclerosis, etc.), but pathologists will not be able to make a firm connection between the seizure problem and Kawasaki's disease. And there is no way an autopsy can confirm autism.

For those of you taking your neuropathology subspecialty boards on September 10, 2009 (all 20 of you!), you should know that it will cost you $1800. You should also know something about Leigh's disease. I can't help you with the $1800; but I can give you some information about Leigh's disease:

Leigh's disease -- also known as Leigh syndrome, or, more descriptively, subacute necrotizing encephalomyelopathy -- is a progressive neurodegenerative disorder of infancy and childhood (but older patients and rare adult cases are recognized). Common clinical findings include signs of dysfunction of the brainstem or basal ganglia such as respiratory abnormalities, nystagmus, ataxia, dystonia, and hypotonia. MRI often shows hyperintensity of the basal ganglia and thalamus, as seen in these images from the University of Cincinnati College of Medicine. The characteristic neuropathologic finding is symmetric necrotic lesions distributed along the brainstem, diencephalon, and basal ganglia. Characteristically, some neurons are intact within the areas of partial necrosis. Degeneration in and around the cerebellar dentate nuclei are also quite common. Loss of Purkinje cells in the cerebellum, accompanied by profuse 'torpedo' formations highlighted by neurofilament immunohistochemistry, can also be seen. Although deep gray structures are most frequently involved, symmetric necrotic lesions as far north as the cerebral white matter and as far south as the spinal cord can be seen. The pathophysiology involves failure of oxidative metabolism within the mitochondria of the developing brain due to a variety of molecular defects. Inheritance can be X-linked recessive, autosomal recessive, or maternal, depending on the responsible defect. In X-linked cases, mutations of the E1 subunit of pyruvate dehydrogenase complex (PDHC) are often present.

That should pretty much cover you for the exam. Good luck!

Nervous System Diseases is a good website about neurological conditions, with an emphasis on neurosurgical disorders. The home page reads: "Our goal is to provide our readers with a complete, in-depth introduction to surgical diseases of the nervous system that is accessible and understandable even if you do not have a background in science or medicine." That being said, the material is not presented in a simplistic manner. For example, I was able to learn the essentials regarding what is involved in an Arnold Chiari decompression procedure. The only criticism I have of this site is that it could benefit from more photographs and illustrations. Congratulations to Josh and the rest of the team at Nervous-System-Diseases.com for providing a very nice website for professionals and patients alike.

Pittsburgh Compound B: An emerging technique for the diagnosis of Alzheimer's disease

Happy New Year! It's good to be back with you after a one-month hiatus. The first post of 2009 is by a guest blogger named Sarah Scrafford, who agreed to write an update on the status of Pittsburgh Compound B in the diagnosis of Alzheimer's disease. A graduate of Indiana Bloomington with a degree in English literature, Sarah is pursuing a career in online journalism. Here's Sarah's report: 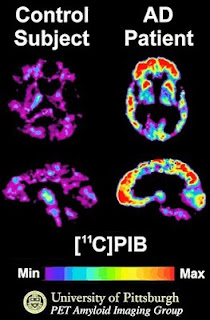 According to Wikipedia, Pittsburg Compound B or PiB is “a fluorescent derivative of Thioflavin T, which can be used in positron emission tomography (PET) scans to image beta-amyloid plaques in neuronal tissue”. Simply put, it is a dye-like imaging agent that’s used in PET scans to determine the amount of beta-amyloid plaques in tissues in the brain. (The image depicts an Alzheimer brain on the right, which lights up with PiB, compared to a normal control brain on the left.) PiB was invented by Professors William E. Klunk (departments of psychiatry and neurology) and Chester A. Mathis (department of radiology) at the University of Pittsburgh School of Medicine.
PiB helps reveal the possibility of Alzheimer’s disease (AD) by binding to some forms of amyloid protein plaques that are believed to destroy brain cells and are a reason for people to develop the disease. Amyloid proteins hasten memory loss and lead to a degeneration of brain cells. The creation of PiB was a major breakthrough in the diagnosis of AD. Before PiB was invented, the only way doctors could prove that people were affected by AD was by autopsy – an answer that comes too late for an individual seeking treatment.
A new study conducted by the same team that invented PiB has paved the way to possibly detecting AD even before symptoms appear. The study, which is the largest of its kind, is led by Howard J. Aizenstein, associate professor of psychiatry and bioengineering at the University of Pittsburg, and includes the team of Klunk, Mathis, Robert D. Nebes, and Judith Saxton. The researchers found that PiB could be used to detect amyloid deposits before patients show signs of Alzheimer’s disease.
The study included 43 people between the ages of 65 and 88, all of whom performed well in cognitive tests, and 9 of whose PET scans showed the presence of amyloid deposits. PiB positivity in asymptomatic patients could be a sign that amyloid deposits are present in the brain long before the onset of symptoms, according to the researchers. But, warn the researchers, the study does not prove definitely that the presence of these deposits is a sure sign that clinical AD will develop. They are not revealing the results of the tests to the participants so as not to cause undue concern among those with a positive test, since the significance of a positive test in an asymptomatic individual is unknown. Instead, researchers will monitor the subjects of the study throughout their lives to study the predictive value of PiB scans.

This article is contributed by Sarah Scrafford.