Review by Dr. Mark Cohen of "Neuropathology: A Volume in the High Yield Pathology Series", edited by Yachnis and Rivera-Zengotita

I am honored to present a guest post by the inimitable Dr. Mark Cohen of the illustrious Case Western Reserve University. Dr. Cohen not only reviews a great new neuropathology textbook, but illustrates yet again why he is widely known as the Maxwell Smart of Neuropathology.

(Not really) Full disclosure
Self-annihilating conflicts of interest, as follows:

Several weeks ago, I received the following teaching evaluation from an anonymous medical student: "One of the worst lecturers that I had the misfortune of experiencing in medical school. Powerpoints were poorly constructed in terms of high yield content...”. So, when our host Dr. Moore blogged about the impending publication of Neuropathology: A Volume in the High Yield Pathology Series, I sprinted to my laptop to pre-order a copy.

The book arrived safely last night (albeit buried in several inches of snow), and I was not disappointed. Best described as Text-Atlas, it weighs in at 351 pages, which is roughly half that of both Perry & Brat’s Practical Surgical Neuropathology and Prayson’s Neuropathology, second edition. In addition, it represents something of a revolutionary approach in that it was primarily written by trainees in pathology, neuropathology, dermatopathology, hematopathology and neurosurgery. This team-based approach (a testament to Captain Tony’s coaching skills) has produced a neuropathology text “of the people, by the people, and for the people”, as well as resulting in a textbook which is remarkably up to date (including such topics as Natalizumab-related PML). In addition to an introduction to basic neuropathological reactions, subjects covered include developmental disorders (both malformative and acquired), cerebrovascular disorders, trauma, brain tumors, infectious diseases, neurodegenerative disorders, demyelinating diseases, toxic/metabolic disorders, and neuromuscular disorders. For a book of this size, the scope of the topics covered is remarkably comprehensive, and they are extensively, if not exhaustively, illustrated. The pictures, especially the gross photographs, are of uniformly high quality (which appears to be maintained in the on-line version, unlike another high-profile textbook I reviewed a few years ago). In addition to the beautifully photographed gross specimens, pictures include histochemistry, immunohistochemistry, and neuroimaging, as appropriate. The vast majority of the photographs are reproduced at 3.25 x 2.5 inches, which is more than adequate to appreciate the features described in the figure legends. With rare exceptions, arrows are not included within the photomicrographs (which I feel is appropriate, but has gotten me in trouble with certain journals, publishers, and students). As is the practice within this series of textbooks, as well as in many other currently published pathology books, the text is entirely bulleted (a practice which I personally dislike, but which is executed quite well here). Another feature that the reader should be aware of is that (no doubt as part of the philosophy of “high-yield pathology”) there are no references.

As an academic neuropathologist, do I have criticisms? (Do bears sh...?). Besides minor quibbles with organization (I probably would have included Natilizumab-associated PML within the Infections section rather than as part of multiple sclerosis) and such Talmudic issues as whether brain invasive meningiomas are truly atypical or not really atypical, but still WHO Grade II, I think that the improvements that I would suggest are largely outside the purview of the authors and editors. Specifically, the titling typography and design layout is nothing short of hideous, and, although the pictures are of adequate size, the presence of many nearly blank pages certainly makes me wish that those spaces had been filled by larger format photographs. In addition, a few of the topics are presented sans photographs, which detracts somewhat from the flow of the textbook (although the authors had the good sense of not trying to illustrate mixed oligoastrocytomas). All in all, however, I think that the book succeeds in its aspirations of presenting "high yield neuropathology".

The editors hope that the volume will be useful for trainees in pathology, neurology, neurosurgery, neuroradiology, neuro-oncology and related fields; as well as being a practical reference for practicing pathologists -- including neuropathologists requiring quick access to the field. As I was reading through the text, I kept this in mind, and triaged these groups as follows:

Unfortunately, while I feel this book will definitely help to guide me in the revision of my medical student lectures, it is by itself not appropriate for medical student study. To paraphrase Jack Nicholson as Col Nathan R. Jessup, USMC in A Few Good Men: You want high yield? You can’t handle high-yield!

Luckily, for those who can handle the truth, Neuropathology: A Volume in the High Yield Pathology Series will provide a valuable and lasting resource.
at February 26, 2013 2 comments:

Email ThisBlogThis!Share to TwitterShare to FacebookShare to Pinterest
Labels: books

A Primer on Perinatal Telencephalic Leukoencephalopathy 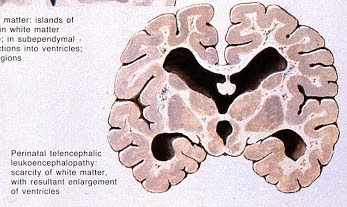 In my last post, it was correctly pointed out by two astute readers that the Netter figure demonstrating brain malformations included an entity which is NOT a brain malformation: perinatal telencephalic leukoencephalopathy (PTL). PTL results from a perinatal hypoxic insult and is not a malformation per se, as the term "malformation" should really be reserved for anatomic abnormalities resulting from developmental defects. The cerebral white matter in the fetus and neonate is particularly susceptible to injury as it is metabolically highly active. Ischemia of the germinal matrix, subependymal region, and periventricular white matter can lead to periventricular leukomalacia that may even calcify and result in periventricular mineralization (1). At its most extreme, PTL may take the form of hemispheric multicystic leukomalacia in which the cerebral hemispheric white matter is replaced by multiloculated cysts separated by strands of fibroglial tissue.(2) 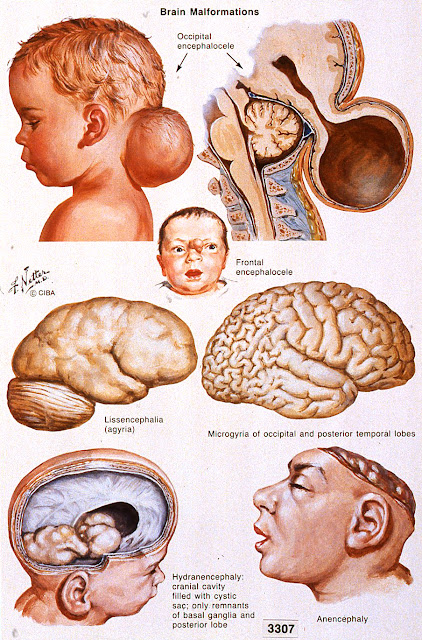 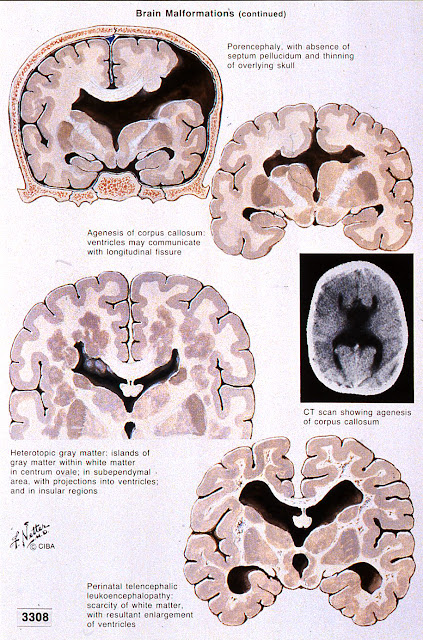