I came across a glioblastoma today (see below) which focally exhibited epithelioid and even gland-like features -- or what the WHO Tumor book calls "adenoid" characteristics. Had there not been other areas showing more classic GBM histomorphology, I'd have been obliged to order an immunohistochemical panel including melanoma and carcinoma markers. 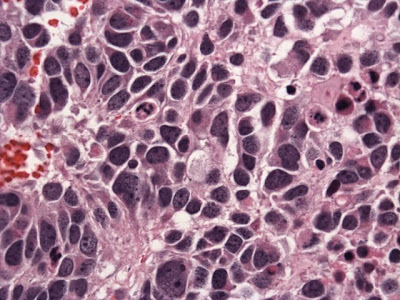 The Alzheimer’s Disease Cooperative Study, a 19 year project funded by the NIA, has embarked on a clinical trial that delivers Nerve Growth Factor (NGF) directly into the brain as a possible treatment for Alzheimer’s.
A Phase II clinical study of Ceregene's CERE-110, a gene therapy product designed to deliver nerve growth factor (NGF) to the brain for the treatment of Alzheimer's disease (AD) is currently in progress.
This Phase II study is a randomized, double blind, placebo-controlled trial and employs gene therapy to deliver nerve growth factor (NGF) directly into the brain. The rationale behind this study is that NGF is known to promote survival of cholinergic neurons, that degenerate in AD, and therefore may provide sustained functioning of these neurons. Direct delivery of CERE-110 into the brain aims to selectively target the Nucleus Basalis of Meynert (NBM), where cholinergic neuronal degeneration occurs in AD.
A Phase I study at Rush University and the University of California San Diego indicated that a single administration of the therapy was generally safe and well tolerated. The Phase I participants underwent cognitive testing, measures of activities of daily living, MRI scans and PET (positron emission tomography) scans. Increases in brain metabolism were observed in several cortical regions of the brain at six months and 12 months in some of the subjects, as compared to other severity-matched individuals with AD, suggesting a potential reversal of patterns typically observed in AD.
This Phase II study will examine the safety and effectiveness of NGF on Alzheimer's disease in 50 patients at 11 research sites throughout the United States. All eligible participants will be randomized equally to one of two treatment groups: half of the subjects will initially receive placebo surgery, but no administration of gene therapy. In the other half, CERE-110 will be injected into the NBM of the brain. At the completion of the trial, subjects in the placebo arm will be given the opportunity to switch to the active treatment protocol if the efficacy and safety data are supportive.
For more information go to: http://www.adcs.org/Studies/NGF.aspx  or  http://www.alzheimers.org/clinicaltrials/fullrec.asp?PrimaryKey=308
at May 20, 2010 2 comments: 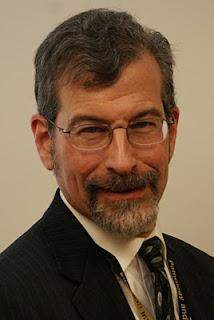 Modern Surgical Neuropathology by Dr. Doug Miller (pictured) was reviewed by Dr. Leroy Sharer in last month's Journal of Neuropathology and Experimental Neurology. (I published a post on this book in June of this year.) Dr. Sharer points out that Dr. Miller's book is extraordinary in that it is penned by a single author -- "a rarity in medical publishing in the 21st century", writes Sharer. Some may take issue with Dr. Miller's fiercely independent perspective on surgical neuropathology, but one must respect his courage to say what he thinks. He is not afraid to challenge mainstream concepts. For instance, in his review, Dr. Sharer notes that Dr. Miller "devised his own tumor grading and classification schema, which he relates to others in use, particularly the World Health Organization system from 2007". If more neuropathologists had the chutzpah to put their perspectives out in the public arena for debate, it would undoubtedly invigorate the field!
at May 14, 2010 2 comments:

Email ThisBlogThis!Share to TwitterShare to FacebookShare to Pinterest
Labels: Best of the Month series, books, neuropathologists

Free samples of IDH1, the next big thing in glioma IHC, is now available

Dianova, the German company that makes anti-human IDH1 antibody for use in immunohistochemical staining of gliomas versus gliosis, is providing free samples of its product. Just go to the site, click on "free sample", and make a request via email. This marker may well be a tremendous advancement in distinguishing reactive astrocytosis from diffuse astrocytoma, so I would encourage you to get your free sample! Thanks to Drs. Craig Horbinski and Ty Abel for assisting me in discovering this opportunity.
at May 13, 2010 1 comment:

After examining this photomicrograph of a section taken from the hippocampus at autopsy, write your diagnosis in the comment section. I'll post the correct diagnosis on Monday (May 10). Good luck! 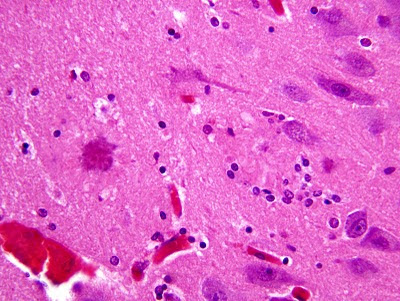