A guest post regarding an important development from Dr. Olaf Bartsch:

Dianova's proprietary antibodies are now available in the USA directly and can be ordered from U.S. and Canadian customers on the HistoBioTec website or by purchase order.

Please see the datasheet for details and order a free sample. 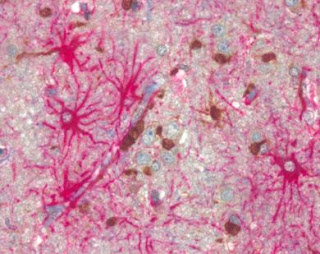 
Antibody clone H09 serves as a Tumor Cell Marker for Astrocytoma and Oligodendroglioma and is highly usefull for the differentiation of reactive gliosis from low grade glioma. Moreover, the antibody differentiates single infiltrating tumor cells from reactive gliosis. 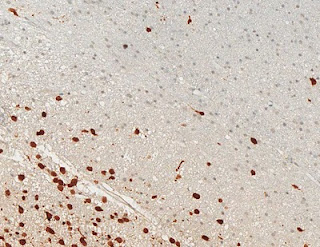 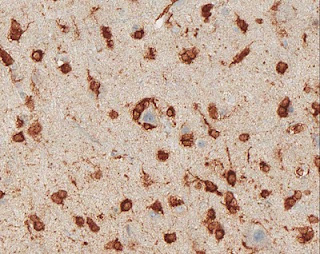 
If you like to discuss any issues regarding application of this unique antibody, you are welcome to visite our booth at the ICN 2010 (XVIIth International Congress of Neuropathology), September 11-15 in Salzburg.
at August 27, 2010 No comments:

Ohio State is looking for a Neuropathologist

The Department of Pathology at the Ohio State University Medical Center (OSUMC) is searching for an academic neuropathologist for a tenure track position.  The Department of Pathology is actively involved in supporting strategic initiatives currently underway at the , which include neuroscience.  This position will play a major role in the research, teaching and service activities of the division of neuropathology.   The applicant must hold a M.D. or M.D. / Ph.D. degree and be board eligible/certified in neuropathology.   Research interests and expertise in malignant glioma biology are encouraged and a research start-up package commensurate with rank will be provided.  The successful applicant should have a demonstrated ability to obtain extramural funding and will be expected to conduct productive basic and/or translational research in a collaborative fashion across the medical center.  Please send a letter of application with a statement indicating research interests, a curriculum vitae, and three references to:
Wendy L. Frankel, MD.
Vice Chair and Director, Anatomic Pathology
The
Department of Pathology
410 , Room E409
at August 25, 2010 No comments:

In today's issue of the New York Times, an interesting article appears on the recently restored brain collection of the great Dr. Harvey Cushing. Certainly worth a visit if one finds oneself in New Haven.
at August 24, 2010 No comments:

Email ThisBlogThis!Share to TwitterShare to FacebookShare to Pinterest
Labels: history

A new sporadic prion protein disease has been discovered. Variably protease-sensitive prionopathy (VPSPr), as it has been named, is the second type of complete sporadic disease to be identified since Creutzfeldt-Jakob disease (CJD) was reported in the 1920s. The landmark finding from the National Prion Disease Pathology Surveillance Center at Case Western Reserve University is published in the August issue of Annals of Neurology. 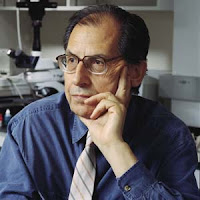 In 2008, Pierluigi Gambetti, MD (pictured), and Wen-Quan Zou, MD, PhD, with collaborators, reported the discovery of this novel disease, which affected patients who exhibit only one of the three types of the prion protein gene. In this follow-up study, they discovered that all three genetic groups can be affected also by this novel disease which now joins sCJD in displaying this feature. However, VPSPr is associated with an abnormal prion protein that exhibits characteristics very different from those of sCJD, as well as other prion diseases, suggesting that it may be caused by a different mechanism, perhaps more akin to other neurodegenerative diseases, such as Alzheimer’s disease. This finding may exemplify, for the first time, the possibility that the prion protein affects the brain with different mechanisms.
While examining cases received at the National Prion Disease Pathology Surveillance Center where he is the director, Dr. Gambetti observed that a subset of cases had clinical and pathological features quite different from those of all known types of human prion diseases. Further, after being tested for prion proteins via the Western blot – the gold standard of prion disease diagnosis – the cases were negative. Dr. Gambetti then collaborated with Dr. Zou, associate director at the center, to solve the riddle of a disease that exhibited some features of a prion disease in histopathological examination but was negative using the standard Western blot test.
Dr. Zou’s lab performed a full characterization of the disease and discovered that the VPSPr-associated abnormal prion protein formed a ladder-like electrophoretic profile on Western blot. “When I obtained the first Western blot result of these cases with a different antibody against prions, I was surprised that these cases consistently exhibited this particular profile; one that I had never seen in my more than 10 years of work on human prion diseases,” Dr. Zou, assistant professor of pathology at Case Western Reserve School of Medicine, recalls. This ladder-like profile is quite distinctive and very different from the profile of common prion diseases. “Discovery of this unique type of prion provides solid evidence that this novel disease may possess a pathogenesis that is different from that of the major prion diseases currently known,” Dr. Zou adds.
Despite extensive research, a relatively large group of neurodegenerative diseases associated with dementia remain undefined. The discovery of VPSPr is chipping away at that group. In the two years since its discovery, more than 30 cases have been reported.
“If, as the current evidence indicates, the VPSPr mechanism of affecting the brain is different from that of other sporadic prion diseases, such as sCJD, the discovery of VPSPr would also provide the first example that the prion protein may spontaneously damage the brain with different mechanisms,” concludes Dr. Gambetti, professor of pathology at Case Western Reserve School of Medicine. “This might apply to other dementing illnesses as well, and has implications for the strategies that need to be followed to attain a cure.”
Drs. Gambetti and Zou, along with their extensive research team, plan to further characterize the abnormal prion protein associated with VPSPr as well as other important features of the protein, such as the disease’s propensity for transmission upon inoculation and its replication in test tubes. These features in VPSPr will be compared with those of sCJD to obtain a complete picture of how the abnormal prion protein attacks the brain in these two diseases.
This research was supported by funding from the National Institutes of Health, Centers for Disease Control and Prevention, Britton Fund, CJD Foundation, Alliance BioSecure, and University Center on Aging and Health with the support of the McGregor Foundation, and President’s Discretionary Fund (Case Western Reserve University).
at August 19, 2010 3 comments:

Is it possible that Lou Gehrig did not have ALS?

Neuropathologist Ann McKee (pictured) is back in the news today with a fascinating article about trauma-related motor neuron disease as a distinct entity from amyotrophic lateral sclerosis (ALS). ALS is also known as "Lou Gehrig's disease". The implication is that, with all the head trauma he sustained both in baseball and in college football, Lou Gehrig himself may not have had ALS, but rather trauma-related motor neuron disease! Read more here from today's New York Times.
at August 17, 2010 4 comments:

Support grows for use of brachyury immunohistochemistry in chordoma

Nirmala A. Jambhekar, MD and colleagues from Mumbai, India recently revisited the immunohistochemical marker brachyury in chordoma in the pages of the Archives of Pathology & Laboratory Medicine (August 2010;134:1181-1187). In a validation study of 51 cases, the authors refer to brachyury as a "new age" marker, perhaps because it was discovered by means of gene expression profiling. (I should mention that the name "brachyury" comes from the Greek brakhus meaning short and oura meaning tail, as it was a gene first described by researchers as one that affected the tail length of lab animals.) The authors found that brachyury staining was positive in 46 of the 51 chordomas and negative in all 58 of the non-chordomatous tumors examined for comparison.

The study endorses the utility of brachyury as part of an immunohistochemical panel when a chordoma diagnosis is being considered. The photo below, taken from the article, depicts the nuclear staining for brachyury one sees in chordoma: 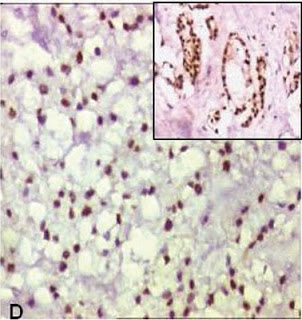 Of course, in classic chordomas derived from classic anatomic locations, immunohistochemistry is hardly necessary. However, as the authors state, "the variable nature of the chondromyxoid matrix, presence of bland spindly cells, and at times paucity of physaliphorous cells poses diagnostic difficulties. For therapeutic purpose, distinct recognition of myxoid chondrosarcomas, dedifferentiated chondrosarcomas, and mucinous adenocarcinomas is valuable."
at August 13, 2010 No comments:

As part of a systematic investigation of surgical errors at a Windsor, Ontario hospital, Canadian officials have urged the province to overhaul the way pathologists diagnose disease. According to London Health Centre neuropathologist Dr. David Ramsay, pictured on the left with Dr. Lee Cyn Ang, the so-called Windsor Report includes a vague intent to set up an internet 'tele-referral' service for neuropathology, including neurosurgical frozen sections:

The investigation began after a patient had an unnecessary mastectomy after a general pathologist misdiagnosed a benign breast lesion as a malignant one. Read more about the quality assurance overhaul here.
at August 05, 2010 No comments: