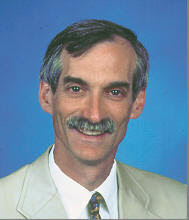 A 75-year-old man with a large, subretinal mass requiring enucleation

The patient is a 75-year-old male who reported to his ophthalmologist complaining of failing vision as well as intermittent “flashes of light” in his left eye over the previous four months. Examination of the left eye revealed markedly elevated intraocular pressure. Fundiscopic examination revealed a large grayish brown subretinal mass with surrounding retinal folds in the superior portion of the eye. The eye was subsequently enucleated. Here is a picture of the bisected eyeball: 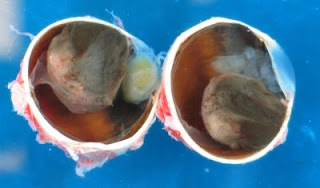 The following is a whole mount of the globe with optic nerve on left and iris on right: 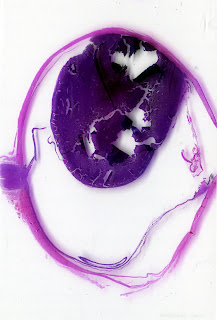 This is a photomicrograph of the anterior chamber angle, which is involved by tumor: 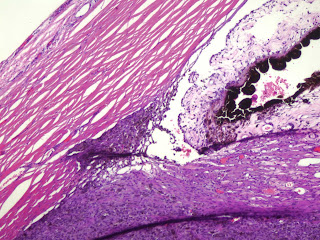 Here is a sampling of different regions within the tumor: 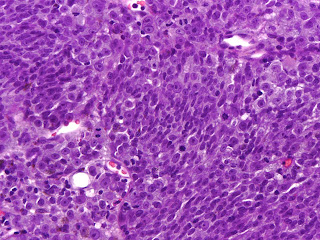 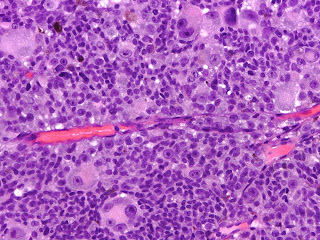 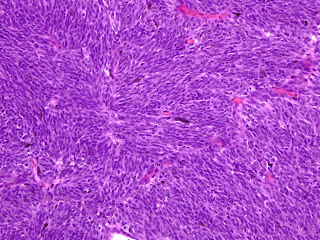 This is a uveal malignant melanoma, mixed cell type. Although the retina harbors a pigmented epithelium, melanomas do not arise from the retina but rather from the melanocytes inhabiting the uveal tract. The uvea is a continuous entity comprised of the iris, ciliary body, and choroid. Melanomas can arise anywhere along the uveal tract. In this case, the melanoma is arising in the choroid and extends into the ciliary body. Tumoral involvement of the irido-corneal angle led to blockage of aqueous humor reabsorption in this patient, resulting in increased intraocular pressure (glaucoma). Three cell types are seen in uveal melanomas: spindle A, spindle B, and epithelioid. Spindle A cells have markedly elongated nuclei and uncommonly have mitotic figures. Spindle B cells share with A-type cells an elongated profile, but spindle B cells have larger, more ovoid nuclei harboring a more prominent nucleolus. Epithelioid melanoma cells are rounder and more anaplastic in appearance, tend to be discohesive, and are occasionally multinucleated. The current case contains a mixture of spindle B and epithelioid type cells. The presence of epithelioid cells confers a worse prognosis. Tumor size is another prognostically significant feature. In contrast to cutaneous melanomas, however, the lateral extent of the tumor is a more significant prognostic feature than is depth. Other prognostically adverse histopathologic features include: high mitotic count; ciliary or choroidal location (iris melanomas fare better); optic nerve extension; intrascleral extension; necrosis; lymphocytic infiltration; neovascularization; and nucleolar prominence. Since there are no lymphatics within the eye, metastasis of uveal neoplasms take an exclusively hematogenous route, with seeding to the liver outnumbering other sites by a very wide margin. Although enucleation is the treatment of choice for larger choroidal melanomas (basal diameter >15 mm and height >10 mm), new precision radiotherapies such as proton beam irradiation and plaque brachytherapy can provide eye-sparing treatments for smaller lesions. As a result, pathologists today see far fewer enucleation specimens secondary to melanoma than in the past. Nevertheless, approximately 10-15% of eyes treated with precision radiotherapy ultimately require enucleation due to subsequent local recurrence or procedure-related glaucoma.