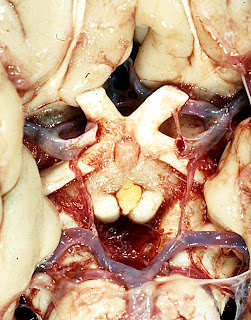 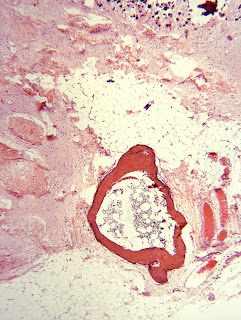 In the last post, it was noted that Dr. Peter Burger presented a series of sellar region "oddball lesions" at the recent USCAP meeting. The esteemed Dr. Mark Cohen was good enough to provide photographs (above) of one particular lesion that was discussed at the meeting: an osteolipoma of the tuber cinereum. Thank you, Dr. Cohen!

The College of American Pathologists Neuropathology Committee (pictured, minus the illustrious Dr. Aaron Wagner) poses the following question to the neuropathology community worldwide:

"If you were constructing a panel of eight biomarkers there were well-established prognostic/predictive markers for CNS neoplasms, what markers would be included? Note: this is not for diagnosis, but for predicting behavior and should include adult and pediatric brain tumors and can include immunohistochemical and molecular tests."

Thanks in advance for providing your opinion in the comments section.
at August 16, 2013 3 comments:

Best Post of February 2013: Review by Dr. Mark Cohen of "Neuropathology: A Volume in the Hight Yield Pathology Series", edited by Yachnis and Rivera-Zengotita


I am honored to present a guest post by the inimitable Dr. Mark Cohen of the illustrious Case Western Reserve University. Dr. Cohen not only reviews a great new neuropathology textbook, but illustrates yet again why he is widely known as the Maxwell Smart of Neuropathology.

(Not really) Full disclosure
Self-annihilating conflicts of interest, as follows:
Several weeks ago, I received the following teaching evaluation from an anonymous medical student: "One of the worst lecturers that I had the misfortune of experiencing in medical school. Powerpoints were poorly constructed in terms of high yield content...”. So, when our host Dr. Moore blogged about the impending publication of Neuropathology: A Volume in the High Yield Pathology Series, I sprinted to my laptop to pre-order a copy.
The book arrived safely last night (albeit buried in several inches of snow), and I was not disappointed. Best described as Text-Atlas, it weighs in at 351 pages, which is roughly half that of both Perry & Brat’s Practical Surgical Neuropathology and Prayson’s Neuropathology, second edition. In addition, it represents something of a revolutionary approach in that it was primarily written by trainees in pathology, neuropathology, dermatopathology, hematopathology and neurosurgery. This team-based approach (a testament to Captain Tony’s coaching skills) has produced a neuropathology text “of the people, by the people, and for the people”, as well as resulting in a textbook which is remarkably up to date (including such topics as Natalizumab-related PML). In addition to an introduction to basic neuropathological reactions, subjects covered include developmental disorders (both malformative and acquired), cerebrovascular disorders, trauma, brain tumors, infectious diseases, neurodegenerative disorders, demyelinating diseases, toxic/metabolic disorders, and neuromuscular disorders. For a book of this size, the scope of the topics covered is remarkably comprehensive, and they are extensively, if not exhaustively, illustrated. The pictures, especially the gross photographs, are of uniformly high quality (which appears to be maintained in the on-line version, unlike another high-profile textbook I reviewed a few years ago). In addition to the beautifully photographed gross specimens, pictures include histochemistry, immunohistochemistry, and neuroimaging, as appropriate. The vast majority of the photographs are reproduced at 3.25 x 2.5 inches, which is more than adequate to appreciate the features described in the figure legends. With rare exceptions, arrows are not included within the photomicrographs (which I feel is appropriate, but has gotten me in trouble with certain journals, publishers, and students). As is the practice within this series of textbooks, as well as in many other currently published pathology books, the text is entirely bulleted (a practice which I personally dislike, but which is executed quite well here). Another feature that the reader should be aware of is that (no doubt as part of the philosophy of “high-yield pathology”) there are no references.
As an academic neuropathologist, do I have criticisms? (Do bears sh...?). Besides minor quibbles with organization (I probably would have included Natilizumab-associated PML within the Infections section rather than as part of multiple sclerosis) and such Talmudic issues as whether brain invasive meningiomas are truly atypical or not really atypical, but still WHO Grade II, I think that the improvements that I would suggest are largely outside the purview of the authors and editors. Specifically, the titling typography and design layout is nothing short of hideous, and, although the pictures are of adequate size, the presence of many nearly blank pages certainly makes me wish that those spaces had been filled by larger format photographs. In addition, a few of the topics are presented sans photographs, which detracts somewhat from the flow of the textbook (although the authors had the good sense of not trying to illustrate mixed oligoastrocytomas). All in all, however, I think that the book succeeds in its aspirations of presenting "high yield neuropathology".
The editors hope that the volume will be useful for trainees in pathology, neurology, neurosurgery, neuroradiology, neuro-oncology and related fields; as well as being a practical reference for practicing pathologists -- including neuropathologists requiring quick access to the field. As I was reading through the text, I kept this in mind, and triaged these groups as follows:
Unfortunately, while I feel this book will definitely help to guide me in the revision of my medical student lectures, it is by itself not appropriate for medical student study. To paraphrase Jack Nicholson as Col Nathan R. Jessup, USMC in A Few Good Men: You want high yield? You can’t handle high-yield!
Luckily, for those who can handle the truth, Neuropathology: A Volume in the High Yield Pathology Series will provide a valuable and lasting resource.
at August 13, 2013 No comments:

Today I profile Dr. PJ Cimino, a prominent first-year neuropathology fellow at Washington University in St. Louis. After a short biographical sketch, Dr. Cimino answers a few of my questions:

P.J. Cimino grew up in Seattle, WA, where he did both his undergraduate studies (double major in neurobiology and biochemistry) and Medical Scientist Training Program (combined MD/PhD program) at the University of Washington. He earned his PhD in Neurobiology and Behavior while working in the laboratory of Tom Montine MD, PhD in the Department of Pathology. His graduate work mainly focused on the biology of microglia related to prostaglandin signaling and neurodegenerative disease. He graduated in 2011 and moved his family from Seattle to the Midwest to train in the combined Anatomic Pathology (AP)/Neuropathology (NP) program at Washington University in St. Louis, MO. He has completed hist first two years of AP training and is now in the NP fellowship portion. During his time in St. Louis he has also developed a budding interest in molecular neuro-oncology. In addition to gaining experience in diagnostic neuropathology, he plans to return to the laboratory bench in order to continue on his track to become an independent physician-scientist in investigative neuropathology. P.J. is married to Heather, and they have three children: Sadie, Dominic, and Francis.

2.       Why did you decide to become a neuropathologist?

The short answer is that neuropathology just fits with my personality and interests. As an undergraduate I was fascinated by neurologic disease and worked in a laboratory that studied the genetics of inherited neurological disorders. After making the decision to become a physician-scientist, I knew that I was drawn to the field of neurology. As many people of my ilk do, I spent time exploring neurosurgery, neurology, psychiatry, neuropathology, etc. I was fortunate enough as a graduate student to join the lab of a great neuropathologist, who showed me what neuropathology was like. After exploring all of those 'neuro' options, neuropathology was the right fit for me. I think it will afford me the opportunity to study the mechanism of neurologic disease while having a hand in patient care.

3.       Name a couple of important professional mentors. Why were they important to you?

Beginning in chronological order, I first have to recognize my undergraduate research mentor at the University of Washington, Wendy Raskind MD, PhD. She was the first person to inspire me to become a physician-scientist. I saw how she managed patients clinically as well as ran a basic science research lab, and used these two endeavors to complement and enhance one another. The next important mentor has to be Tom Montine MD,PhD, as mentioned above. He initially got me interested in neuropathology, and essentially helped me to solidify my career goals. He has helped me tremendously over the past several years and still provides much needed sound guidance. In the past couple of years I have gained some newer and emerging professional mentors at Washington University in St. Louis, including BobSchmidt MD, PhD and David Gutmann MD, PhD. I do want to acknowledge that this list is not comprehensive and I am a product of several other great professional mentors that I have met along the way.

4.       What advice would you give to a pathology resident interested in doing a neuropathology fellowship?

5.       What city would you like a future American Association of Neuropathologists meeting to be held and why?

I think that any city in the Pacific Northwest or Mountain region would be a good place to hold a national meeting that takes place in the end of June. These include: Denver, Seattle, Portland, Salt Lake, etc. I think that the end of June is a good time to head North and West to cool down for a few days while looking at posters, going to talks, and attending the diagnostic slide session. The organizers must have anticipated my response to this question, as they have preemptively scheduled the 2014 meeting to take place in Portland, OR.
at August 01, 2013 No comments: