Best Post of August 2012: A case of renal cell carcinoma metastatic to a meningioma

A 74-year-old woman with a history of a seizure disorder had been followed for several years with a stable and unsymptomatic left parasagittal dural-based brain tumor presumed to be a benign meningioma. Recently, though, the lesion increased in size and hemorrhaged, leaving her significantly paretic on the right side. Neurosurgery thereupon performed a craniotomy for tumor removal. Intraoperative frozen section diagnosis was meningioma. But, upon receipt of the permanent sections, I was impressed by the staghorn vessels at low power and hemangiopericytoma immediately came to mind.

I was obviously dealing with a meningioma, but something else was going on in that area featuring the staghorn vessels. This region exhibited a different histomorphology:

Follow-up: The patient received radiation to the tumor bed and is recovering.
at January 25, 2013 No comments:

Email ThisBlogThis!Share to TwitterShare to FacebookShare to Pinterest
Labels: Best of the Month series, neoplasms 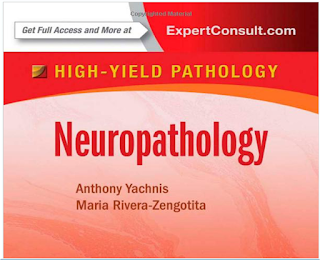 Who doesn't love the feel of a brand new textbook in your hands, and that first subtle crack of the binder as you open the cover releasing the synthetic fragrance of smooth new paper? We will get to re-live that feeling when Dr. Anthony Yachnis' Neuropathology: A Volume in the High-Yield Pathology Series is released. The book has a copyright year of 2014, so we may have to wait a while before it is released. But, if the good Dr. Yachnis is the principal author, it will surely be worth the wait. In his preface, written with co-author Dr. Marie L Rivera-Zengotita, Dr. Yachnis writes: "Our intent in producing this volume is not to replace several other outstanding comprehensive textbooks in the field but rather to provide quick reference via bulleted summaries of key facts that are supported by multiple representative photographs on topics of interest in the major areas of neuropathology. We have attempted to provide rapid access to a range of nervous system disorders for trainees and practitioners.... It should be a handy practical reference for practicing pathologists, including neuropathologists requiring quick access to the field" This book does not just cover tumors, but also malformations, cerebrovascular disorders, trauma, infectious disease, demyelinating disease, neurodegenerative disorders, toxic-metabolic disease, peripheral nerve disease, and muscle disease.  I think I can speak for the entire neuropathology community, Dr. Yachnis, in saying that we eagerly look forward to getting our hands on this book.
at January 17, 2013 1 comment:

The biggest Alzheimer Disease discovery in 2012

Perhaps the biggest discovery in the Alzheimer research world last year was the identification of a mutation in APP that significantly decreases its cleavage by β-secretase, leading to 40% less production of amyloidogenic peptides in vitro. The researchers found the mutation (A673T) in the APP gene protects against Alzheimer’s disease and cognitive decline in the elderly without Alzheimer’s disease.

Future drugs that can recreate this Aβ-reducing effect “should perhaps be given not only to people at risk of Alzheimer’s but to all elderly people,” says Kári Stefánsson, senior investigator of the study, which came out of Iceland and appears online in Nature.
at January 04, 2013 5 comments:

Dr. Marc Del Bigio of the University of Manitoba was first in the line-up for an excellent forensic neuropathology symposium as a satellite ...