Best Post of August '08: Loss of von Economo neurons may be associated with frontotemporal dementia

And now for another in my occasional “Best of the Month” series, where I march through the past months choosing only the very best blog posts. Since publishing this post, I have been looking for von Economo neurons in my autopsy cases. I believe that I have come upon three in a row, as depicted in the following photomicrograph from the the right anterior cingulate gyrus of an Alzheimer patient. As you can see, von Economo neurons are huge spindle-shaped neurons. (Compare their size to nearby pyramidal neurons): 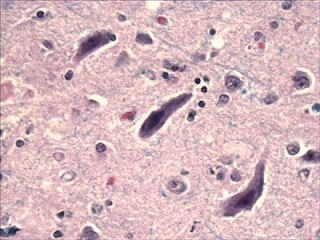 With that update, I now present my "Best of the Month" post for August '08:

On Wednesday [Aug 6 '08], I wrote about the fact that the brains of gorillas weigh only about 40% as much as human brains. There is, however, one way in which our brains are similar to simians: the presence of the von Economo neuron (VEN).

cingulate and insular cortices (layer Vb). It was later determined that VENs are only present in hominids (humans and great apes), and that they are more numerous on the right side of the brain. Also referred to as spindle neurons because of their spindle-shaped cell bodies, VENs are larger than pyramidal neurons and tend to cluster parallel to small arterioles (pictured on right as compared to pyramidal neuron). More recently, it was found that VENs are also present in various species of whales and in elephants. The common theme here is that VENs are present in social animals with large brains. Since the VEN-populated areas of the brain are preferentially affected in frontotemporal dementia (FTD), it is thought that perhaps loss of these neurons may be related to the aberrant social functioning seen in FTD patients.
at November 24, 2008