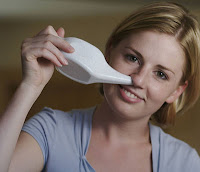 Now that it's winter and our noses and sinuses are being dried out by our heating systems, many of us turn to neti pots (also known as 'nose bidets'). The illustrious J. Clay Goodman, MD, neuropathologist at Baylor, just sent me an article from The Houston Chronicle warning people to use distilled, bottled, or boiled water. Officials in Louisiana are investigating whether a 51-year-old woman and a 20-year-old man both contracted the brain-eating amoeba Naegleria fowleri after using tap water in their neti pots. The disease, while rare, is most commonly contracted after inhaling water from a lake, pond or river. If investigators confirm the two victims died after using tap water from a neti pot it will be the first time the disease has been contracted from tap water.
at December 16, 2011

The article I read stated that it was well water, not city water from a treatment plant. Which would make a difference in assessing the risk.

Interesting, poolmaven51. I was just sort of going with what The Houston Chronicle reported, but if it was well water, it puts a different spin on the story.

It would be nice if there was a follow up article clarifying water source. I would think that a journalist from The Houston Chronicle would have done their homework and realize the importance of that difference and how it affects the public. Public health officials could have easily clarified that point. If poolmaven51's article was in error and it was not well water, public health officials should correct that point and reiterate precautions as they investigate. That is just my opinion as a Southerner with college kids that might entertain using a neti pot but not be inclined to take boiling or bottled water precautions. I didn't understand the risk myself until it was explained to me that well water is too cold.