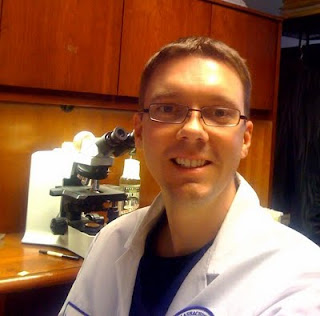 Today I feature a guest post from Dr. Peter Cummings (pictured), an emerging power player in the field of forensic neuropathology. Dr. Cummings appeared on this blog in July in connection to a People Magazine article about his investigation of a 1980 murder case. Today Dr. Cummings reappears as he attempts to harness the power of Web Pathology 2.0 to create a network among those who practice the tiny-but-important sub-sub-specialty of forensic neuropathology. Take it, Pete:

"The field of forensic neuropathology has expanded exponentially over the past few years and has seen the publication several new text books and the development of a one-year fellowship position in some medical examiner offices. With this growth the practicing neuropathologist who handles forensic brains needs to keep up with current research. In light of this, I proposed to Dr. David Louis (the current president of the American Association of Neuropathologists) that the upcoming AANP meeting have a dedicated forensic neuropathology session. Dr. Louis agreed and charged me with the task of drumming up interested individuals. Even though the area of forensic neuropathology has seen tremendous growth, it seems as though those of us practicing the 'dark art' are out of touch with each other. I have managed to get in touch with a few folks and have hopes of finding more of us forensic NPer's. My goal is to get people interested in submitting forensic-related abstracts for the June 2010 AANP meeting in Philadelphia. The submission deadline is February 5, 2010, so there is plenty of time. According to the powers-that-be at AANP, right now I have enough people for a dedicated poster session. If more people are interested, we could get a platform session. A formal decision will not be made regarding a poster or platform session until all of the abstracts are submitted. So, if you are interested, get in touch with me (at pathologypete@hotmail.com) so I can get a head count (no pun intended, but appreciated if you thought it was punny). Also, if you are practicing forensic neuropathology to any degree, still get in touch with me even if you don't want to prepare an abstract. I would like to hear from you. OK, lets get those abstracts cooking, there is power in numbers!!"

I am interested. But, i want to know if this program is meant for foreign nationals as well. because, i am from India. i will communicate the rest through my email.