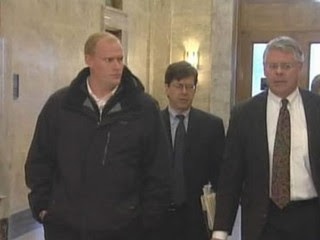 Last week I posted that neuropathologist Mark Cohen testified for the defense in a high-profile child death case where a father is accused of causing the death of his son. The boy's mother is already serving time for her role in the child's death. Cohen, on faculty at Case Western in Cleveland, testified for the defense in the state of Colorado's case against Alex Midyette, whose son was found to have multiple broken bones at the time of his death. The local news channel reports that Mr. Midyette (pictured entering the courtroom with his lawyers) declined to testify in his trial today. Dr. Cohen stated that the 11-week-old infant suffered from methylenetetrahydrofolate reductase deficiency, an autosomal recessive disorder of folate metabolism causing elevated plasma homocysteine levels. Patients with this rare disease suffer from neurologic developmental delay, and exhibit abnormalities of CNS myelination. In the article I read on the topic (see reference), no mention is made of skeletal abnormalities. So, I am not sure how one would explain the multiple broken bones in this case by invoking this metabolic disease. In any case, we await the verdict.