Heterotopic neuron in a patient with epilepsy

The patient is a 22-year-old female with intractable epilepsy who underwent resection of an epileptogenic region of the left lateral temporal lobe. In addition to mild cortical dyslamination (not depicted) and Chaslin's subpial gliosis (pinkish band on top surface of brain in photomicrograph), there were an increased number of individual heterotopic neurons within the neocortical molecular layer. The heterotopic neuron pictured below is also disoriented, with its axon projecting tangentially rather than perpendicularly to the the pial surface. 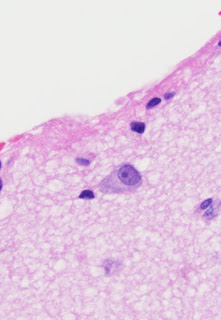 Email ThisBlogThis!Share to TwitterShare to FacebookShare to Pinterest
Labels: epilepsy