According to an associated press report, the gargantuan defensive tackle William "The Refrigerator" Perry (pictured below), who helped lead the Chicago Bears to a 1985 Super Bowl victory, has been hospitalized after complications related to Guillan-Barré syndrome (GBS). 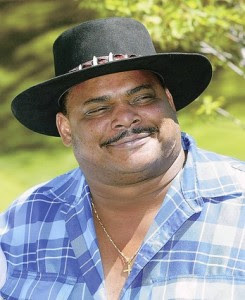 Perry remains in serious condition at Aiken Regional Medical Center, located in his boyhood home of Aiken, South Carolina. Perry's nephew, Purnell Perry, said Tuesday that his uncle was admitted more than a week ago but was expected to recover. According to thebrainmatters.org, a website of the American Academy of Neurology Foundation, GBS "can be a devastating disorder because of its sudden and unexpected onset. Most people reach the stage of greatest weakness within the first 2 weeks after symptoms appear, and by the third week of the illness 90 percent of all patients are at their weakest. The recovery period may be as little as a few weeks or as long as a few years. About 30 percent of those with Guillain-Barré still have a residual weakness after 3 years. About 3 percent may suffer a relapse of muscle weakness and tingling sensations many years after the initial attack."

According to Perry's agent, Adam Plotkin of NOPAC Talent Agency, Perry's GBS had developed into a chronic form known as chronic inflammatory demyelinating polyradiculoneuropathy (CIDP). Depicted below is an electron photomicrograph of a transerve section of peripheral nerve involved with CIDP. Note the the thinly myelinated axons at the 3, 5, and 10 o'clock positions. Surrounding these axons are "onion-bulb" formations wherein multiple Schwann cells are concentrically arranged around inadequately myelinated axons. 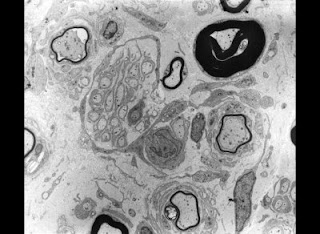 Thanks to Mark B. Weiss of Earthwise Productions for alerting me to Perry's condition.
Posted by Brian E. Moore, MD, MEd at 8:33 AM

I remember him. He always seemed so much more affable that the others of that era. Hope he recovers fully, and fast.

Having been felled by GBS just about two years ago, I know exactly what he is going through. It is absolutely frightening to suddenly lose control of your body. While I still have some residuals, I recovered within 6 months and returned to work full-time a year ago. You are in my thoughts and prayers.

Didn't know this about the Fridge. Wow.

Always one of my favorite football players when I was growing up. Definitely agree with Marie that he always seemed to be personable and affable. Hope things improve quickly for him. Wish him all the best.