Polio: Once ubiquitous, now a disease of poverty

Today is Global Blog Action Day ‘08, which this year focuses on the topic of poverty. One important place where poverty and neuropathology intersect is in the disease known as poliomyelitis (polio). This is a highly infectious viral disease, which mainly affects young children. The virus is transmitted through contaminated food and water, facilitated by crowding and poor sanitation. The virus multiplies in the intestine and then can invade the nervous system. In a small proportion of cases, the disease causes paralysis, which is often permanent. Although the spinal cord is usually involved, the distribution of paralysis depends upon the distribution of lesions within the CNS. The paralysis is usually asymmetric and involves the legs more often than the arms.

There is no cure for polio, it can only be prevented through immunization. The introduction in the 1950s of the Salk vaccine and in the early 1960s of the Sabin vaccine caused a sharp decline in the incidence of poliomyelitis. Polio vaccine, given multiple times, almost always protects a child for life. 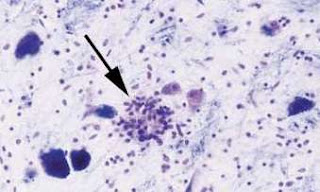 Histopathologically, neuronophagia is prominent from a very early stage, as lymphocytes and microglia aggregate around dying neurons like vultures around a carcass. (The photomicrograph depicts neuronophagia of a neuron in the inferior olive of a patient with brainstem encephalitis caused by coxsackievirus.) Eventually, only clusters of microglia remain where the neuron once lay. In patients who die years after onset of the illness, autopsy examination of the spinal cord reveals anterior horn neuronal loss and corresponding discoloration of anterior nerve roots.

The World Health Organization (WHO), in collaboration with other agencies, has been working on a global immunization initiative since 1988. The Global Polio Eradication Initiative has been working to immunize children in impoverished regions of the world, where education and health care resources are scarce. The results of this initiative are encouraging: polio cases have decreased by over 99% since 1988 -- from an estimated 350, 000 cases then, to 1,997 reported cases in 2006. In 2008, only four countries in the world remain polio-endemic, down from more than 125 in 1988. The remaining endemic countries are , , and .

I remember when our family went on a Sunday morning to get our polio sugar cubes at the junior high.

Excellent poverty topic, and one I doubt most Americans give a second thought to.