The NFL to deal with concussion more aggressively: a good step, but not enough 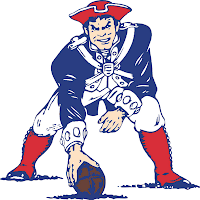 The recent hullaballoo, which included my own blog post on the subject, regarding the long-term consequences of football-related traumatic brain injury has moved the National Football League to take measures to more aggressively manage players who suffer concussions. The New York Times reported yesterday that players who exhibit any significant sign of concussion will be removed from a game or practice and be barred from returning the same day. The new rules will take effect in this week's games. I salute the forthright manner in which the NFL is dealing with new concerns regarding the brain injuries that are intrinsic to the game. I would advocate more dramatic rules changes, such as requiring that linemen start each play in an upright position rather than in the traditional three point stance exemplified in the now-defunct New England Patriots logo pictured. Regardless of what changes are made at the professional or school-boy level, I still intend to prohibit my own son from ever playing the sport of football. As Dr. Joseph Maroon, the team neurosurgeon for the Steelers and a member of the N.F.L.’s committee on concussions said: "On every play there are traumatic experiences to the head."  The football season is short, and life is long. Thanks to Drs. Doug Shevlin and Mike Beckmann for making me aware of these emerging developments.
at December 03, 2009