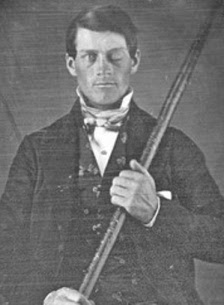 The photograph was discovered by Jack and Beverly Wilgus, a couple from Massachusetts who owned the photograph for 30 years, thinking it depicted a whaler holding a harpoon. When they posted the picture online, an anonymous tipster suggested it might be Gage. The LA Times article continues the story: "Intrigued, the Wilguses compared their image to that of a life mask at Harvard Medical School's Warren Anatomical Museum and found it could be superimposed perfectly, with scars lining up correctly. Apparent writing on the metal rod in the image matches writing on Gage's iron rod, which is also in the Warren Museum."
at November 30, 2009

Email ThisBlogThis!Share to TwitterShare to FacebookShare to Pinterest
Labels: Best of the Month series, history, psychiatry

Sorry for being a nerd, but I just learned of Gage in my psychology class. It's kind of exciting to read about him on a blog.