When you've exhausted your differential diagnoses for a nerve mass, Dr. Kleinschmidt-DeMasters is here to help 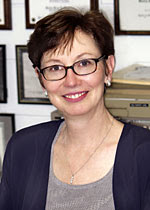 In the same issue of Archives of Pathology and Laboratory Medicine that was referenced in the previous post, a team including Bette K. Kleinschmidt-DeMasters, MD (pictured) authored an interesting article entitled Rare Nerve Lesions of Non-Nerve Sheath Origin: a 17-year Retrospective Series. DeMasters, neuropathology chief at the University of Colorado in Denver, and her team did a computer search of all peripheral nerve masses at her institution from 1991 through mid-2008. After coming up with 458 cases, they threw out all the schwannomas, neurofibromas, and other nerve sheath tumors, ending up with a mere 37 cases to review. I was surprised by the number of spinal nerve root hemangioblastomas they came up with (7). Also notable were the four cases of brachial plexus "desmoid-type fibromatosis", which are not nerve masses per se, but are often at first mistaken for neurofibromas. The AFIP Tumor Atlas (Tumors of the Soft Tissues, third series) defines extra-abdominal desmoid fibromatosis as "an infiltrating fibroproliferative process that develops in the soft tissues deep to the subcutaneous tissue and is composed of fibrocytes, fibroblasts, and myofibroblasts set within a collagenous to myxoid stroma that possesses uniformly bland nuclear features" (page 71). Other unusual diagnoses are featured in this article include sclerosing meningioma invading nerve (WHO knows how to grade that one?), extrarenal rhabdoid tumor, and primary Ewing sarcoma of the brachial plexus. This article, along with a similar one published a few years ago by Kim et al. (see reference below), are good to keep in mind to help with your differential diagnosis the next time you are faced with a specimen called a "schwannoma" by the radiologist but bearing no histological resemblance to any of the typical nerve sheath tumors.