Best Post of April '09 - LGMD2I: alpha-dystroglycan without the sugar coating 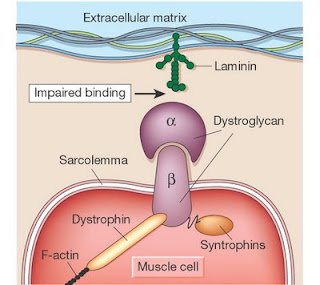 A muscle biopsy from 16-year-old girl with exercise intolerance and no family history of muscular dystrophy was received by my institution several months ago. Laboratory studies showed that the girl had elevated creatinine kinase and liver enzyme levels. In consultation with Dr. Steven A. Moore at the University of Iowa, it was determined that the girl likely has a mutation causing abnormal glycosylation of alpha-dystroglycan. Alpha-dystroglycan helps to anchor the extracellular matrix to the intracellular actin filaments in muscle fibers. Hypoglycosylated alpha-dystroglycan is unable to properly bind to the extracellular matrix (see illustration). The vaguely indecent name of Fukutin-Related Protein (FKRP) is given to the gene most frequently mutated in non-congenital dystroglycanopathy; and the disease associated with this mutation is known as Limb Girdle Muscular Dystrophy 2I (LGMD2I). (Fukutin, which has sequence homology to FKRP, is named for its association with the eponymic Fukuyama Congenital Muscular Dystrophy).

Two commercial monoclonal antibodies to alpha-dystroglycan are available (Millipore's IIH6 and VIA4-1), each of which recognize glycosylated epitopes. In our patient, immunofluoresence showed reduced signal for both of these epitopes. There appears to be a correlation between degree of hypoglycosylation and clinical severity.

LGMD2I, one of the more common forms of limb-girdle muscular dystrophy among people of Northern European descent, has a wide clinical spectrum. Patients can present in childhood, adolescence, or adulthood. Some patients lose ambulation in their teens, while others remain ambulant well into adulthood. Dilated cardiomyopathy is common, and respiratory failure is a complication that also can be seen in this disease.

Given the cardiopulmonary risk associated with LGMD2I, our patient was referred to cardiology and to pulmonology for baseline assessments. She will also be referred to a muscular dystrophy clinic for possible physical rehabilitation. It is unclear whether she will get genetic testing to definitively determine whether or not FKRP is mutated.

Email ThisBlogThis!Share to TwitterShare to FacebookShare to Pinterest
Tags: Best of the Month series, muscle