The College of American Pathologists' Neuropathology Committee has a new chair: Dr. Eyas Hattab. He replaces Dr. Dan Brat in that role. Dr. Hattab also has recently been named chair of the department of pathology at the University of Louisville. He'll be a great asset to both the CAP and the University of Louisville in his new leadership roles. Best of luck, Eyas!!
Posted by Brian E. Moore, MD, MEd at 10:57 AM No comments: Links to this post 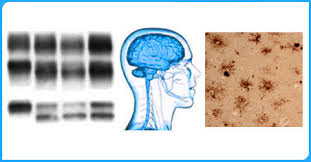 The NPDPSC serves the United States as the national testing site and repository for tissue samples from suspected cases of prion disease (CJD and others). We accept any autopsy tissues for free-of-charge prion testing. With proper tissue procurement, we are able to diagnose with certainty whether or not prion disease is present; and if so, exactly which form and subtype of prion disease (sporadic vs. familial vs. variant) the patient has. Tissue samples are then stored indefinitely and shared with qualified researchers and institutions around the globe.

In order to provide accurate surveillance of prion diseases in the United States, the NPDPSC needs to test CNS tissue. Patients often pass away in non-hospital settings, and even for those who die in hospital, there is ever-increasing reluctance among medical institutions to perform post-mortem examination on patients if CJD is even considered a possibility. Therefore, the NPDPSC offers financial and logistical assistance to families with loved ones suffering from suspected prion disease to obtain a brain-only autopsy and subsequent testing for CJD free of charge to the surviving family (including transportation to-and-from a regional autopsy site if needed). These procedures are coordinated with the nearest approved regional site willing to perform these procedures.

Our national network is a group of public and private autopsy providers located across the country. Sometimes procedures are performed in hospital settings; other times they are performed in mortuary settings prior to final arrangements. We are always looking to add autopsy and mortuary professionals to our network. We encourage all hospitals and medical centers to send us tissue samples from possible prion disease cases as part of our mission to identify and contain potential outbreaks of prion disease. However, we also are willing to reimburse individuals or institutions who accept brain autopsy requests on our behalf. We arrange transport of the patient to a pre-designated autopsy site and provide free-of-charge shipping materials for sending tissue.

If you, or someone you know, would like to join our national network of autopsy providers, please contact Jeff Negrey for further information (phone 216-368-1290 or email jtn8@case.edu).
Posted by Brian E. Moore, MD, MEd at 2:10 PM No comments: Links to this post

I am delighted to be in Chicago this weekend meeting with my wonderful colleagues on the College of American Pathologists Neuropathology (CAP-NP) Committee. We are making plans for a SAM-eligible educational product that will update you on the 2015 iteration of the World Health Organization Classification of Tumors of the Central Nervous System. The new WHO book is set to be published in October of this year; and we on the committee are making plans to create a CD to be issued a year from now designed to keep you in the loop regarding the latest in CNS tumor classification. This weekend's meeting also marks the end of Dr. Dan Brat's tenure as CAP-NP chairman. Dr. Brat will  be replaced by the illustrious Dr. Eyas Hattab at the helm of the CAP-NP Committee. After a long day at work today on the CAP-NP educational product, committee members retired to Smith and Wollensky Steakhouse for some well-deserved nourishment before returning to finish up our work tomorrow. In addition to Drs. Brat, Hattab, and myself, current committee members include Drs. Bill Hickey,Joe Ma, Roger McLendon, Matthew Schneiderjan, Aaron Wagner, Cynthia Welsh, and junior member Matthew Cykowski. (Additional note: the next CAP-NP meeting is just a couple of weeks away when we meet at in Key Largo, Florida.)

Email ThisBlogThis!Share to TwitterShare to FacebookShare to Pinterest
Tags: Best of the Month series, neuropathologists

Jose Juan Verocay (1876-1927) [Figure 1] was a Uruguayan physician who trained and worked for most of his adult life in Europe in the late nineteenth and early twentieth century. 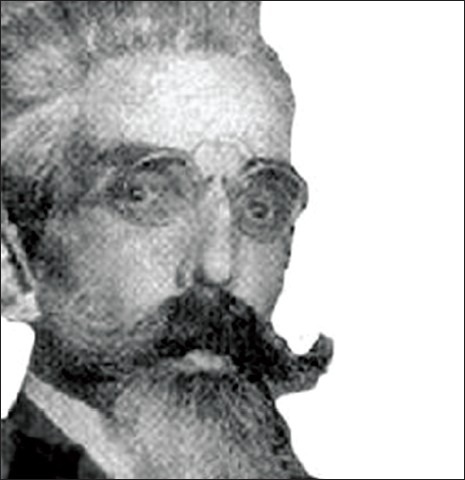 Figure 1
Photograph of Jose Juan Verocay (circa 1915)
He was born on June 16, 1876 in the town of Paysandu in Uruguay to immigrant parents. His father Silvino Verocay, was from the Tirol region in southern Austria and his mother Rosalia Garrone, was from the dolomite region of northern Italy and the family name is possibly derived from the town of Verocai which is near Cortina D’Ampezzo located in the Dolomitic Alps in north-eastern Italy. (From Joshi R., Learning from Eponyms: Jose Verocay and Verocay bodies, Antoni A and B areas, Nils Antoni and Schwannomas. Indian Dermatology Online Journal 2012 Sept-Dec; 3(3): 215-219.)
Posted by Brian E. Moore, MD, MEd at 3:00 PM No comments: Links to this post

Four subgroups of medulloblastoma have been defined based on genetic alterations:

Wingless (WNT) - WNT medulloblastomas display monosomy 6 and most show nuclear accumulation of the WNT pathway protein beta-catenin, which serves as a useful immunohistochemical screen for this group. Medulloblasomas with more than 50% nuclear staining for beta-catenin have been shown to have WNT pathway activation, whereas those with only focal nuclear staining do not. Overall survival for WNT medulloblastomas are dramatically longer than those of other subtypes, and clinical practices surrounding the treatment of this subtype reflects this better prognosis.

Sonic Hedgehog (SHH) - SHH medulloblastomas often show a nodular/desmoplastic histopathology and are associated with a better prognosis in younger children and infants. 9q deletion is characteristic, and MYCN amplifications are occasionally noted. GAB1 is expressed in the cytoplasm of nearly all SHH medulloblastomas but not in other groups and can be detected imunohistochemically, making it a valuable SHH-group marker.  Targeted therapies directed at this subgroup have been established and are entering clinical practice.

"Group 3" - Group 3 medulloblastomas have the worst overall prognosis, have a high incidence of large cell/anaplastic histology, and are very frequently metastatic. This group contains the vast majority of MYC amplified tumors, with MYC amplification being a strong negative prognostic factor. It has been suggested that Group 3 tumors should perhaps be re-named MYC medulloblastomas, but wide agreement has not been reached on this designation. Group 3 tumors occur more commonly in males than females, and are found in infants and children, but almost never in adults.

"Group 4" - Group 4 medulloblastomas classically harbor isochromosome 17q; but as the molecular pathogenesis of this group is not currently clear, the generic name "Group 4" remains the consensus designation. Although isochromosome 17q is also seen in Group 3 tumors, it is much more common in Group 4. KCNA1 has been suggested as an immunohistochemical marker for this group, but this requires validation.  The only other notable cytogeneic change seen in Group 4 tumors is loss of X chromosome, which is seen in 80% of females with this tumor subtype. Group 4 patients have an intermediate prognosis, similar to patients with SHH tumors.

In conclusion, the worst prognosis is associated  with Group 3 medulloblastoma; Group 4 and SHH have an intermediate prognosis; and WNT medulloblastoma tends to have the best prognosis.
Posted by Brian E. Moore, MD, MEd at 8:40 AM No comments: Links to this post