An 8-year-old girl presented with lack of coordination of the right arm and leg progressing over the course of six months. Occasionally, the girl would hold her right arm in a postured decorticate position when she would run; and she would suffer frequent falls when playing. Physical examination showed right-sided hemidystonia and rigidity. An MRI revealed a lesion: 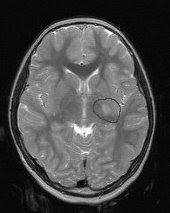 The initial differential diagnosis of this tumor included primary CNS lymphoma, given the tight lymphocytic clustering in and around blood vessels (blue aggregation on the right): 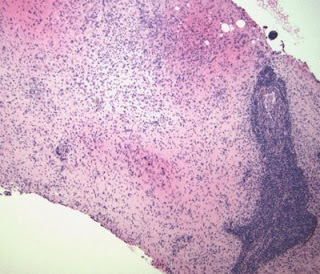 However, the young age of the patient would make the diagnosis of CNS lymphoma less likely. Closer inspection also revealed the presence of scattered larger round cells with prominent nucleoli (center of the photomicrograph below): 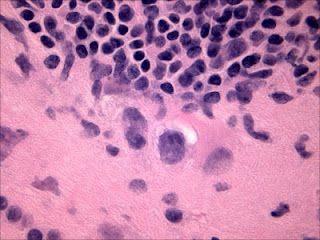 These cells may be dismissed at first as native basal ganglia neurons. But their pleomorphism and haphazard distribution raises the specter of neoplasia. A childhood tumor that typically induces a flagrant inflammatory infiltrate in the setting of plump cells with prominent nucleoli is the germinoma. Subsequent positive immunohistochemical staining of these plump cells with placental-like alkaline phosphatase (PLAP) confirmed the diagnosis of germinoma in this case: 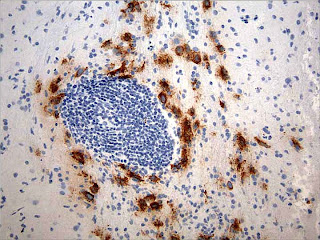 Germinomas typically arise in the pineal gland or suprasellar region; but loci away from the midline, as exemplified in this case, represent at least 10% of cases. Germinoma is the most common of the germ cell tumors of the central nervous system, but one is obligated to search a putatively unadulterated germinoma for other elements (such as yolk sac tumor, choriocarcinoma, and embryonal carcinoma) before bestowing the diagnosis of pure germinoma. Treatment for pure germinoma often gives gratifying results, as it is potentially curable with platinum-based chemotherapy and low-dose radiation. Survival rates approach 100%, even when local recurrence requires salvage therapy.